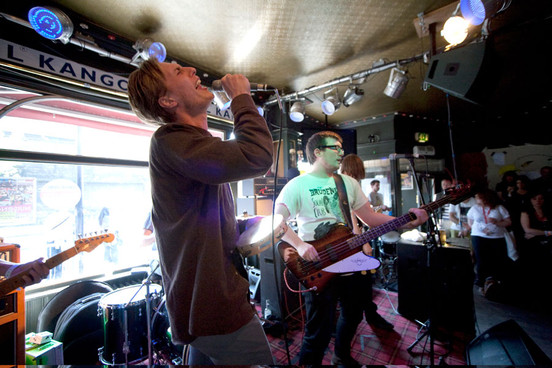 Leeds punk band Eagulls, on of our 2013 100 Bands You Need To Know, have announced that they will be playing the Late Show With David Letterman tonight, January 31. It looks like David Letterman is trying to earn some serious punk points, having recently had on punk bands the Orwells and Against Me!. The show starts at 11:35 p.m. EST and will also feature Bill Murray; tune in then or set your DVRs.

The band will be playing the song “Possessed,” which is taken from the their forthcoming, self-titled album—set to be released on March 4 via Partisan Records. AP managing editor Scott Heisel called the track, “A delicious slice of poppy post-punk (post-pop-punk?) loaded with thick slabs of guitar and vocals that sound like they were shouted toward a mic through an open window 15 feet away (that just happened to have a pop filter on it).” Listen to “Possessed” below, and let us know what you think.

The band will be on tour in the EU and UK throughout February and March. You can check out the full list of dates below the song.