This comes after Alabama Barker issued a statement in regards to the incident. You can read her statement here.

The family say they feel compelled to speak about Graham’s diagnosis with Autism Spectrum Disorder to provide additional context.

“We have never publicly addressed this in the past, but given the events of the last few days, we feel compelled to speak out now to offer some additional context and insight into the unfortunate misunderstandings that occurred and clear up the deeply hurtful mischaracterizations of Graham. As a child, Graham was diagnosed with Autism Spectrum Disorder. He has difficulty understanding social cues.”

“Graham’s challenges have always been a non-issue in our family. In fact, it is a truly beautiful and wonderful thing that makes Graham the amazing brother, son and friend that he is. His outlook on life inspires us every day. He’ll be the first one to say “today is gonna be the best day ever,” or, “you’re my best friend and you look amazing today.” He sees the world as the happiest place, where everyone is a potential friend, and he wants everyone to feel included. One very recent Christmas, we hosted a holiday party at our home, and had athletes, musicians, artists, and models show up, and we were very confused until they happily told us “Graham reached out on social media and invited us!” Anyone who has ever met Graham will agree, he is the friendliest and most kind-hearted, welcoming person in the world.”

“We understand that his interactions were misinterpreted and misunderstood in the confusing world of social media, and we are deeply sorry. Graham certainly never meant to make anyone feel uncomfortable.”

“As a family, we will continue to work with him to have the right tools and knowledge about social boundaries, and to better navigate and utilize social media while he takes a break from it.”

“We hope anyone who’s been affected, and in turn felt uncomfortable, can accept our deepest apologies.”

However, last month, Sierota sent her a BBQ invite. 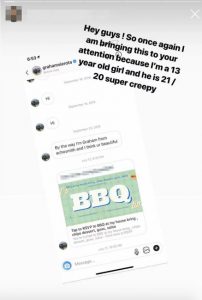 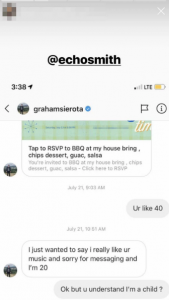 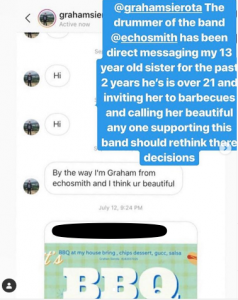