We all have a doppelgänger or at least someone we sort of resemble. Unfortunately for Eminem, his is currently the suspect in a trespassing case in New Hampshire.

Police in Rochester put out a Facebook post Thursday asking for help in identifying a man wanted for alleged trespassing.

“Officer Robinson is looking to identify this male in regards to a criminal trespassing case,” the post states. “If you know the information about this suspect’s identity, please call 603-330-7128 and reference case 18-4300-OF. Thank you!”

One made a reference to lyrics from Em‘s “Without Me.”

Others took a jab at “Lose Yourself” and “The Real Slim Shady.” 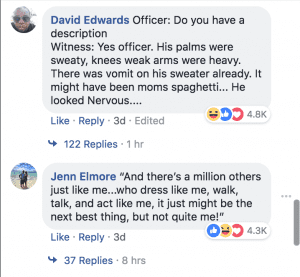 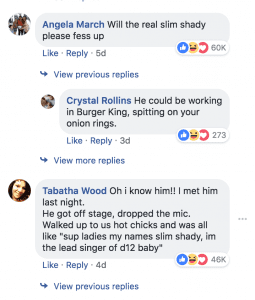 …or the rapper’s many names. 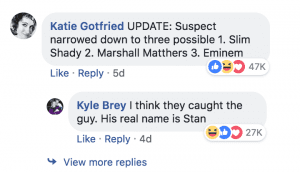 Eventually, the police department came forward with an update on the post: “UPDATE: The subject has been identified, and we can confirm it is NOT Marshall Mathers.”

Check out the Shady lookalike below.

Eminem has had a wild past few weeks thanks to a beef with Machine Gun Kelly (Tyler The Creator, Iggy Azalea and more).

The rapper surprise-released his Kamikaze LP Aug. 31, taking aim at MGK (among others) in his track “Not Alike” where he brings up comments the former made about his daughter in 2012.

G-Eazy chimed in almost immediately after Em with “Bad Boy” in what was assumed to be a response to MGK’s Funk Flex freestyle earlier that week.

MGK responded to G-Eazy on social media that same day and Eminem with the release of “Rap Devil” Sept. 3. Kells performed the track in Eminem’s home state and it later hit No. 1 on iTunes.

After teasing he was back in the studio and declaring he ”want[s] to destroy him,” Eminem most recently fired back with “Killshot” Sept. 14. The track ended up having the biggest rap debut in YouTube history and hit No. 3 on Billboard.

What do you think of the viral photo? Does he look like Eminem? Sound off in the comments!