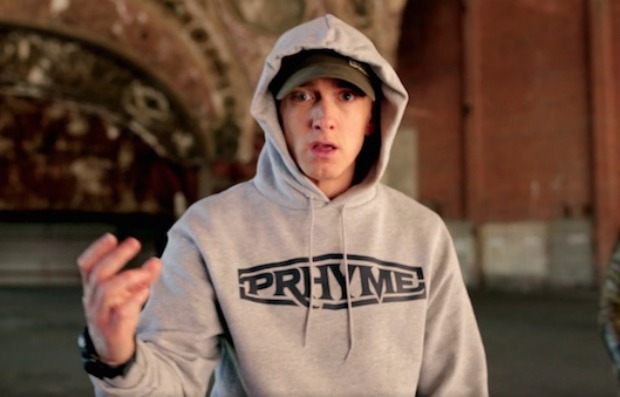 Highest selling rap artist of all time and intimidating Detroit native Eminem has had a well-documented battle with drug additction. In a new featured editorial in Men's Journal, Em shares details about his 2007 drug overdose, his resulting weight gain, and how he's managed to find a workout plan that works for him. Apparently Slim Shady was running up to 17 miles a day after his overdose, which left him in battered shape.

If you want to look that scary and fit at 42 as well, read closely.

Before his overdose, Eminem claims that fitness was not a huge priority in his life and often came second to his music career. Aside from some remedial workouts with Dr. Dre and the like, Em tried out boxing. Running then took over Eminem's life to a near-dangerous level.

When I got out of rehab, I needed to lose weight, but I also needed to figure out a way to function sober. Unless I was blitzed out of my mind, I had trouble sleeping. So I started running. It gave me a natural endorphin high, but it also helped me sleep, so it was perfect. It's easy to understand how people replace addiction with exercise. One addiction for another but one that's good for them. I got an addict's brain, and when it came to running, I think I got a little carried away. I became a fucking hamster. Seventeen miles a day on a treadmill. I would get up in the morning, and before I went to the studio, I would run eight and a half miles in about an hour. Then I'd come home and run another eight and a half. I started getting OCD about the calories, making sure I burned 2,000 every day. In the end I got down to about 149 pounds. I ran to the point where I started to get injured. All the constant pounding from the running began to tear up my hip flexors.

The rapper has since found that workout DVDs work for him due to the lonely nature of his home gym. When you're done picturing the hysterical image of Slim Shady working out to a Body Beast DVD, head over to Men's Journal to read all about Eminem's trial-and-error workout routine.