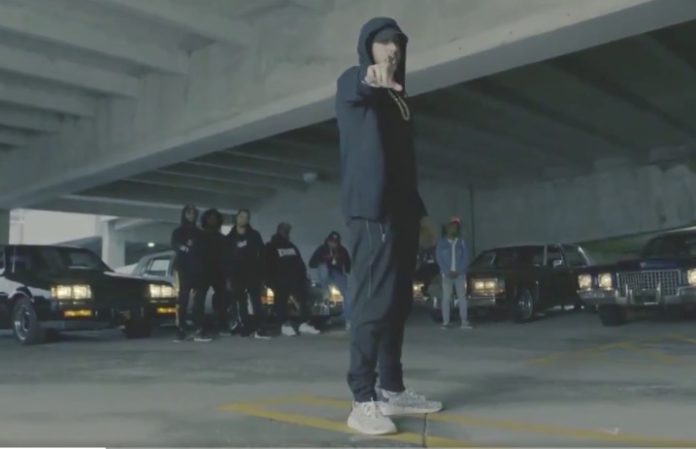 Eminem performed a scathing diss track on President Trump at the BET Hip Hop Awards that has gotten people talking all over the country.

BET shared the full verse on Twitter, and you need to watch it yourself if you haven't already.

The FULL verse that EVERYBODY is talking about! @eminem BODIED THIS! #HipHopAwards pic.twitter.com/zoS0wEwjQF

Eminem does't hold back at all, saying “Racism’s the only thing he’s fantastic for, ‘cause that’s how he gets his fucking rocks off and he’s orange.”

The verse targets Trump's support of Bannon, the Charlottesville Riots, his economic policies, his response to North Korea and much more. And in case you were wondering, Eminem makes it explicit that he will not tolerate any of his fans favoring President Trump.

“And any fan of mine who’s a supporter of his
I’m drawing, in the sand, a line
You’re either for or against
And if you can’t decide who you like more and you’re split
On who you should stand beside
I’ll do it for you with this:
Fuck you.”

People are already sharing strong reactions to Eminem's stance. Most people have shared a positive response:

Racism is the only thing he's Fantastic 4(fantastic for), cause that's how he gets his rock off, he's orange. Sheesh @Eminem!! ����✊������#United pic.twitter.com/wcL28BCWpy

I appreciate you @Eminem ✊�� pic.twitter.com/nwavBwsOkQ

But not all the reactions have been so positive. Right-wing sympathizers have been quick to point out Eminem's more problematic past:

Ah yes. @Eminem a moral compass who's been arrested, rapped about assaulting his wife, sued by his mother & anti-LGBT. Real people's champ.

In Eminem's new rap video, he's almost as violent and nasty to @realDonaldTrump as he usually is to women and gays.

While there's no denying that Marshall Mathers has never been a saint, what the argument really boils down to is whether or not we're okay with celebrities using their platform to speak out about politics.

What did Eminem want? Attention. What are you all giving him? Attention. He wins. You all lose

What do you think of Eminem's verse? Do you think his past affects what he's saying, or are you glad that even someone like Eminem is speaking out? Sound off in the comments below.