Enter Enter Shikari have announced a run of twelve intimate North American tour dates as part of their Stop The Clocks Tour.

The tour will mark the first time the band has come back to the U.S. in over a year.

The band will kick off their North American run this September, marking the first time they’ve been on this side of the Atlantic since their 2018 run in Jan./Feb.

Enter Shikari will be joined by Can’t Swim on all dates, with the exception of Chicago.

Each night will feature just the two bands, allowing both to perform full sets.

“We felt it was wrong to close out the Stop The Clocks tours without trying to get back to North America to bring the whole ‘Spark-era’ full circle,” says Enter Shikari vocalist Rou Reynolds. “The more cozy shows should see the kind of sweaty mayhem we need to see us off into writing the next album. Gutted we can’t get over to the West Coast this time around, but commitments back home just won’t let that happen. So we hope we can make that up to our friends in California and nearby states before too long.”

Venues this time around will be about 50 percent the capacity they were on the band’s last U.S. tour.

Tickets are slated to go on sale this Friday, June 21. You can check out the full list of cities and dates below. 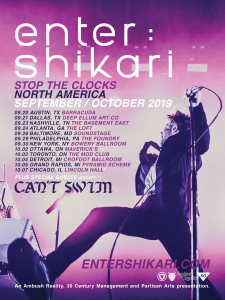 To accompany the announcement, the band have released a video of The Quickfire Round – where the band played four songs in eight minutes.

Are you excited to see Enter Shikari make their way back to the U.S.? Sound off in the comments below!