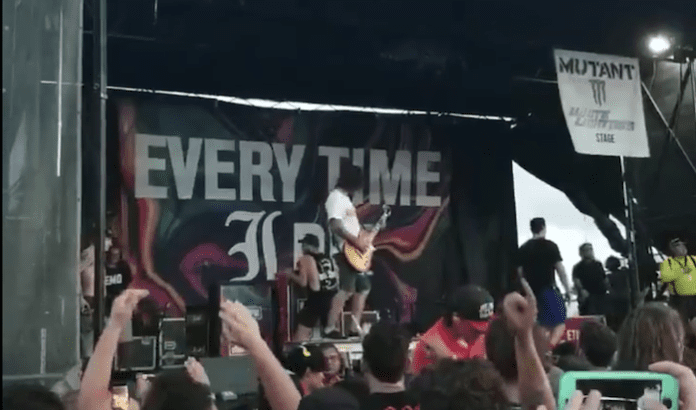 Pennywise might have played the last set at the last show of Vans Warped Tour forever, but Every Time I Die weren’t going to end their set without kicking and screaming.

Every Time I Die were the last band besides Pennywise to play the final show of the cross-country run. After their set ended, Jordan Buckley returned to the stage to play an extended outro to “Map Change” on guitar. While he was performing, the crew was actually dismantling the stage around him.

Buckley’s performance went on for more than 10 minutes, but it wasn’t as long as he anticipated to play.

“I wanted to get to 8:31 so I could tell Pennywise that, sorry, but we were actually the last band to make noise at [Vans Warped Tour],” Buckley joked on Twitter. “Stage hands gave me the hook at 8:18.”

I wanted to get to 8:31 so I could tell Pennywise that, sorry, but we were actually the last band to make noise at @VansWarpedTour. Stage hands gave me the hook at 8:18 https://t.co/Np9FSy2USF

Buckley later went on to tweet about how much the moment meant to him, also sharing a video of him performing.

“I will think about this on my death bed. And I guarantee I won’t not smile,” he wrote. We cannot handle all this Warped Tour sadness; it’s making us cry.

I will think about this on my death bed. And I guarantee I won’t not smile. https://t.co/AjdiMqHFID

Seeing @JordanETID play the end of “Map Change” for what seemed like an eternity as @VansWarpedTour was literally being torn down behind him is a sight I won’t soon forget ?

Laugh-crying watching Jordan Buckley play the closing riff to “Map Change” as the stage crew breaks down around him in his attempts to be the last ringing note played at Warped.

jordan buckley just played the map change riff for ten entire minutes while they packed up the stage and that is the last thing i ever saw at warped tour. goodnight

Was the most perfect way to close out one of the longest chapters of my life.  I sang so hard I threw up three times. I’ll never know how you guys do it. Thank you @everytimeidie. Thank you @JordanETID

over 500,000 people. 38 cities. 46 days this year. 24 years. @KevinLyman didn’t just build a tour, he didn’t just build a community, he built an entire world. and it was beautiful. it was kind. thank you for letting us live there, @VansWarpedTour. we’ll see you down the road.

Warped Tour ending has been emotional for everyone in the scene, and the festival left attendees with a few inspiring words after it was all officially over. The final run of Warped Tour included performances from bands such as Waterparks, Palaye Royale, State Champs and many more.

What did you think of Every Time I Die’s final performance? Let us know in the comments.