Every Time I Die announce lineup for annual ’Tid the Season

Metal stars Every Time I Die command the stage year-round, but this year they’ll be playing their second annual ‘Tid The Season show Dec. 15 in their hometown of Buffalo, New York. They will be joined by Knocked Loose, the Menzingers, Angel Du$t, Snapcase, Bouncing Souls, Vein and Turnstile. The event also will feature wrestling. If you can’t make it to this special showcase, you can catch ETID on their fall tour.

Trio Stand Atlantic announced their signing to Hopeless Records and released a new song titled “Lavender Bones.” The track is taken off their upcoming debut record Skinny Dipping out Oct. 26. They’ll also be touring with Neck Deep on the following dates.

Ozzy Osbourne prepares to give one fan an epic concert experience

‪You could be my VIP for my Las Vegas at @MGMGrand Garden Arena concert for #NoMoreTours2 to rock out from the side of the STAGE! ‬ ‪Who knows what could happen… Support a great cause and enter at omaze.com/ozzy now!

Ozzy Osbourne, in affiliation with Omaze, is selecting one lucky fan to watch his concert side-stage in Las Vegas this October and reside in a four-star hotel for the night. All fans have to do is donate $10 to Love Hope Strength. One winner will be randomly selected.

Emo rapper Lil Aaron gifted fans with a new music video for “ANYMORE” alongside songstress Kim Petras. The two form a dynamic duo who take to the streets, rides in fancy cars and commit just a little bit of vandalism.

Many Rooms’ “Which Is To Say, Everything” music video drops alongside new album

Emerging singer/songwriter Many Rooms released a music video for her song “Which Is To Say, Everything” from her new record There Is A Presence Here. With powerful words and sounds, she creates a beautifully crafted record.

Cute Is What We Aim For announce fall tour 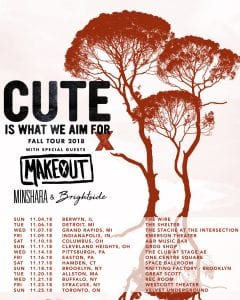 Cute Is What We Aim For will be touring the U.S. beginning Nov. 4. They will be joined by the sensational Makeout, Minshara and Brightside. Tickets can be found here.

Check out the @AtlanticRecords new Podcast series #InsidetheAlbum, kicking it off with @dashboardconfessional. Listen as Chris Carrabba gives a behind the scenes look at the new album ‘Crooked Shadows.’ Subscribe and listen on @ApplePodcasts ***Link in bio * * * * * * #Music #Podcasts #dashboardconfessional #CrookedShadows #chriscarrabba #AtlanticRecords #AtlanticPodcast

Atlantic Podcasts has begun the creation of a new series exploring behind the scenes of fans’ favorite records. Featured artists include Dashboard Confessional, Wallows, Jason Mraz, Vance Joy and more. INSIDE THE ALBUM can be streamed and downloaded from Spotify, Apple Podcasts and Google Play.

Indie star Snail Mail will be headlining a winter tour alongside Interpol and Alvvays. She will conclude her lineup with Car Seat Headrest and Interpol at Madison Square Garden where she will make her debut. Tickets can be found here.

Cursive shared their new song “Under The Rainbow,” the second single off their upcoming concept album Vitriola. The album is due out Oct. 5, and you can preorder it here.