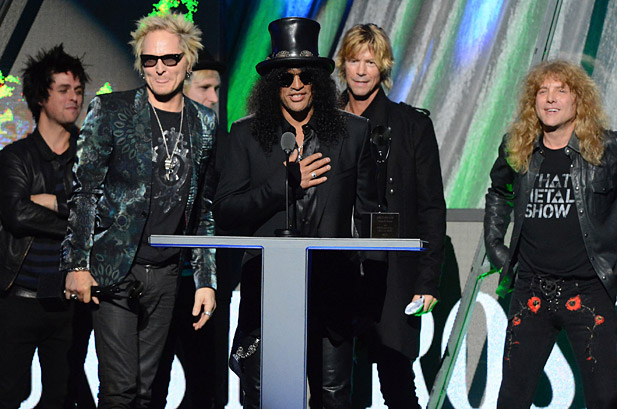 Former Guns N' Roses drummer Matt Sorum has released a lengthy statement on the band's induction into the Rock And Roll Hall Of Fame this past weekend. The early-era of the band accepted the induction and also performed live, sans vocalist Axl Rose.

Check out the statement below:

I am releasing this statement to bring closure to the night’s events at the Rock N’ Roll Hall of Fame, and to all things Guns N’ Roses. This will alleviate numerous press statements and interviews about the subject, which I have already addressed on my Twitter.

In these last few months since getting notice about being inducted into the Rock N Roll Hall Of Fame, many emotions and feelings have gone through my head and heart, as well as the original five members of GN'R: Axl, Slash, Duff, Izzy and Steven. I was also chosen to be inducted, along with Dizzy Reed.

It was slightly awkward for me in some ways knowing some fans have the original five in their hearts for a reunion. I chose to say
to Slash and Duff, ‘Please have Steven play, and let me know what you would like me to do.’

Two days before the event. Axl made his statement known. And it was apparent he wouldn't be attending. In respect to him, that is his decision and should be honored. Also, Izzy declined. So I suggested Slash call Gilby, who was left out of the proceedings. Gilby was a member of the band and contributing to the ‘Use Your Illusions’ World Tour, which took us around the globe for three years, as well as playing guitar on ‘Spaghetti Incident’ and ‘The Live Era’ albums. It felt like the right thing to do.

In fairness to the rest of the original line-up and myself, we decided to go ahead and attend. This is an honor that is once in a lifetime and couldn't be missed, especially for fans of the band. To us, it was honoring them as well. Regarding playing live, we agreed that we would share the stage together, joined by Myles Kennedy as guest singer, who did a fine job filling big shoes. Steven graciously offered ‘Brownstone’ and played two other ‘Appetite’ tracks, and I sang and joined him near the kit on ‘Paradise City.’

It felt perfect for all involved.

In my speech, I made references to drugs and Steven being dismissed from the band, in which I referred to, “How could someone be fired from Guns N’ Roses for doing too many drugs??”

It was meant to be light-hearted. But knowing the struggles Steven has endured all these years. I felt I needed to clarify that Steven was onstage, healthy, and ready to rock.

It is well known that the rest of the band has endured addiction and alcoholism and at this point in our lives, we are all healthy and sober
Not to make light of drugs and alcohol…we were all full-blown addicts when the band split. What started out as a party and what we believed was part of the makeup of the band turned on all of us in the end.

Many years of soul searching and reconnecting with our inner selves have brought glorious gifts: Velvet Revolver with millions of records sold and a Grammy, Steven with his new band, and more. We are now all playing music and making records on our own that is truly what we love, before any of the business of music came into play. The music has always been the passion, before anything else.

Stevens’s passion for GN’R is something that no one can explain but him: it’s a true love gone, but never forgotten. How many people have felt that in their lifetime?

I told Steven and the rest of the guys the night of the Induction that night was for them and what they created on the streets of Hollywood, and it can never be taken away. The music will live on. And that's what counts. Not about who was there at the Induction. That the music will always be theirs and no can ever take that away.

Also, I have much respect for my former band, The Cult. And all the musicians I have played with over the years. They have all taught me so much.

I also need to thank my dearest and closest confidante, Ace Harper, who is my fiancée' and has made me a better man. She has walked beside in times of darkness, and has been there for me when all the stage lights and backstage parties were over.

This is where life is for all of us now survivors of a Rock & Roll era you will never see the likes of again: Married men Slash with two wonderful boys, Duff with two beautiful girls, Steven happy with a beautiful wife.

Life is good, my friends…we are alive! God Bless the fans of GN'R.