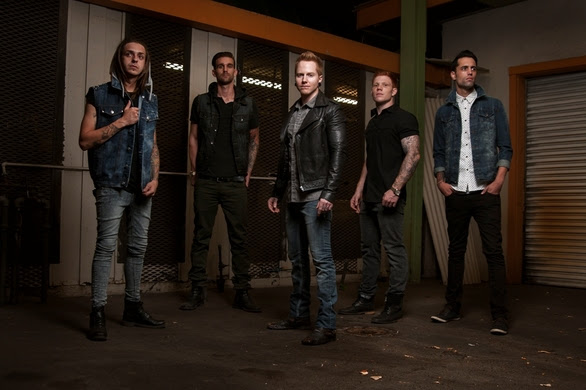 Earlier today, it was revealed that bassist Brian White and drummer Cory La Quay have left A Skylit Drive. (Read their official statement here.) Now, the remaining members of ASD have given an exclusive statement to AP, which you can read below.

Along with commenting on the member change, the band have announced a new acoustic album, Rise: Ascension, which will be released January 6. (Pre-orders are coming soon.) ASD also revealed that they will release their next full-length album in the summer of 2015. Read their statement, and watch a special video announcement below.

“Before anything else we'd like to apologize for the manner in which yesterday's abrupt & unplanned announcement of Cory and Brian's departure from A Skylit Drive was. We had known for quite some time that both members were becoming increasingly less happy in the band. Both for their own reasons. We knew their time in ASD was coming to an end. Some of the separation was even mutual, but for you, the fans, ASD as a whole should have been able to create an announcement together regarding the separation. You all deserve NO less than that. We don't want our fans, the lifeline of our passion, to be left wondering. Respectfully, below our statement [here] you will find Cory & Brian's.

As for the future of ASD, We will continue on. ASD is about more than one or two people. It's about the music & the fans. Where the music comes from is safely intact. That we can promise you. As for our fans, there are none better, and we know you'll be right there by our sides till the end. Knowing that, we have all we need to carry on.

In the spirit of moving forward and sticking to our word of a big announcement coming, we have a couple of things in store. First things first, we will be releasing a full length acoustic album in January of 2015. For the album we have recreated our most recent record “RISE” in its entirety in FULL acoustic. The album will be called “RISE: ASCENSION”. Please check out the announcement video for full details & pre order specials. Second, we have already begun writing for a new record set to release in the Summer of 2015! Lastly, expect to see us back on the road in early 2015. We can't be stopped!

To be honest, we couldn't feel better about where we're at. There is no doubt within us. We are stronger and more determined than ever before. At the end of the day all we have is our music, and all we want to do is share it with the world. We are beyond excited to continue this journey, and we hope you're ready for the ride!”