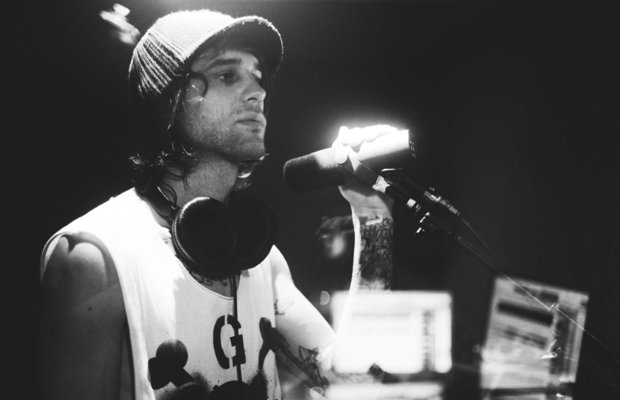 In a recent interview, blessthefall frontman Beau Bokan filled AP in about recording their latest album in Florida with producer Elvis Baskette (who also helmed their 2009 album, Witness). Stay tuned to altpress.com tomorrow for the full interview—but in the meantime, check out some exclusive details about the guest stars who will hopefully be on the band’s forthcoming full-length.

Are there any big differences in the way you recorded or did things, writing-wise, this time around? You said you got to spend more time on vocals, but are there any other big differences?
Well, we’re at a different studio. We’re with Elvis again, but he’s got a way bigger studio now. The last one was in a house in Virginia, which was unreal—we were right on the beach, and it was perfect. This time we’re in this really big professional studio with tons of hallways and there’s a couple other tracking rooms in there, so that’s a big difference. So I think the record is going to sound sonically a lot better than the last one, which I’m stoked on. You know, we had more time in the studio to really nitpick things.

Also [for] the first time we’re having guest vocals on this record, so we’re stoked. Tim Lambesis from As I Lay Dying’s going to do a part, and we’re looking at Ronnie Radke, who was the old singer of Escape The Fate. He’s like, “Yeah, let’s do something.” So we’re trying to figure out something for him to do; [we’ll] probably have me and him go back and forth on a verse or something. And Chris Dudley from Underoath is actually going to do some programming on the record, which is going to be awesome. For years I’ve loved Underoath—all the programming, the digital stuff just sound amazing—so to be able to have Chris’ brain in on this record, it’s going to be insane.

People are going to freak out about all that stuff.
Yeah—you know that last record was, like, it’s us. It’s just us, this is what we’re doing, we’re still alive, this music’s still great. Now it’s like, Okay, let’s give them something special. We were working on another guest vocal—we wanted a couple screamers and then Ronnie to do some singing on it, but I think we’re just narrowing it down to Tim and Ronnie.

Are these appearances confirmed yet, or are these still in the works?
We’re talking to record labels. Nowadays, it’s like a whole process I feel like. They’re our good friends and I feel like, you know, before it could’ve just been like, “Yeah, I’ll do it” and [they’d] record it and [be] done. Now it’s like, we got to talk to their label and get rights and all this stuff. They’re both on board 100 percent. Tim’s been on board for a while; he has a studio in San Diego, so we’ll send him the track and he’ll just track and record it there. Ronnie will fly in, do vocals and then Chris lives about an hour away, so [he] is going to drive up. He’s already kind of started messing with some songs and it sounds so crazy, the stuff that he does. The kid’s a genius. So yeah, they’re all confirmed, they’re all super stoked on it, it’s just a matter of getting the labels to agree.