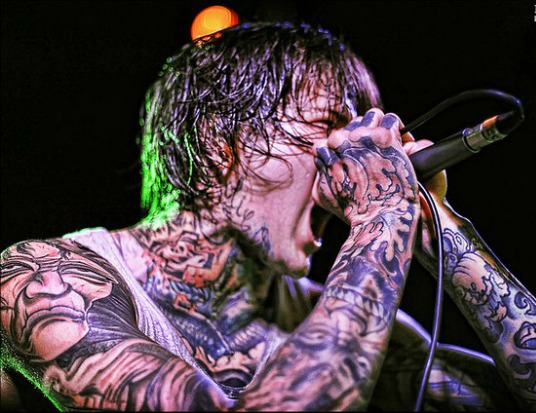 About 300 Suicide Silence fans decked in band T-shirts and hoodies gathered in Huntington Beach, California, Thursday night to celebrate the life of Mitch Lucker, the band’s singer, in a candlelight vigil.

Lucker, 28, died at 6:13 a.m. PT Thursday at UC Irvine Medical Center following injuries he sustained when he crashed his motorcycle into a light pole at the intersection of Main Street and 13th Street in Huntington Beach at approximately 8:55 p.m. PT Wednesday.

At the memorial, Lucker’s wife, Jolie, said she discovered two empty Four Loko cans that the singer drank before he took off to an unknown destination on his 2013 Harley Davidson Wednesday evening. Jolie says she got in her car and followed Lucker, with their 5-year-old daughter Kenadee in the back seat. She saw him crash and found his body near the light pole. She also says his bike was about 50 yards away. The Los Angeles Times reported the motorcycle continued sliding down Main Street after the accident and hit a northbound 2007 Nissan Titan pickup. No one in the truck was harmed.

Jolie urged the crowd to never drink and drive, while also spelling out words like “d-e-a-d” so Kenadee couldn’t understand what she was saying.
“I never thought I would see Mitch d-e-a-d,” she said. “I’m really fucked up from it. My daughter is going to grow up without her dad. I’m a single mom now.”

Family, friends and fans spoke of fond memories of Lucker at the vigil. Suicide Silence guitarist Chris Garza said Mitch was dedicated to his craft and eager to learn even more. “Even though he’s known as one of the most respected vocalists in the genre, he just started taking vocal lessons to improve his voice,” he said. “He was so dedicated to improving both his musical side of things and his personal life. It was obviously very overwhelming for him. I think that he really had the will to make positive adjustments, but unfortunately he wasn’t given that last opportunity.”

Jolie added that Lucker had plans to go to MIT to learn about motorcycles and eventually build his own vehicles.

Friend Shaun Vauhn said Lucker loved performing for and meeting his fans, but also never developed an ego from it. “He just made sure everyone left every show happy,” he said. “There was never a dull day with him.”

Lucker’s mother also spoke of her son’s talent, as she was shedding tears. She said he was shy and that music brought out a different side of him.
“He was screaming from the moment he was born,” she said. “When he was a kid, we learned he had anxiety, and he would scream all the time. Neighbors would get annoyed by it, but we knew that was just Mitch. He also screamed in his music. He turned his life toward music to get all of his emotions out.”

Hundreds of fans stayed long into the night to pay their respects, even after police asked the crowd to disperse because they were blocking traffic.

Alex Martha, 21, of Laguna Niguel, California, said Lucker was a pioneer in the modern-day metal scene. “He was the entry for so many people when they came into metal,” he said. “He was a great guy. Fame didn’t get to his head. If I ever make it in my band, I want to be like him. He was so grounded, even though he became incredibly famous.”

Danielle Musitelle, 17, of Sherman Oaks, said Lucker’s music helped her get through life struggles. “His music keeps me going,” she said. “It’s exactly the genre that everyone likes, and there’s meaning behind the lyrics he wrote. Every message is a good message. This is such a devastating loss.”

View our original report for response from the music community, the intial news and more.