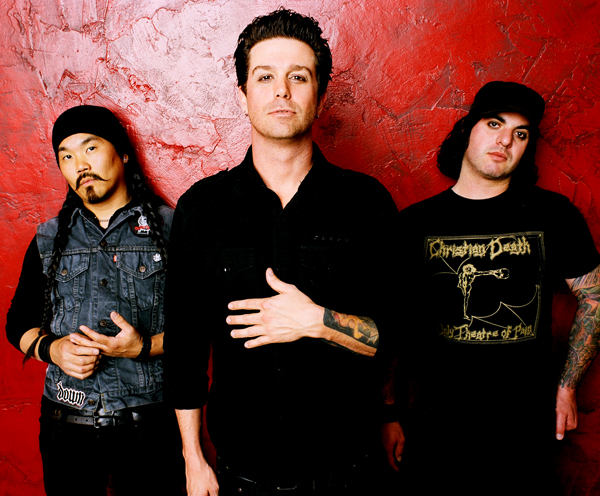 Guitarist Steve “Kid” Morris and bassist Pat “PK” Kim have left Unwritten Law after the former got into a physical argument with singer Scott Russo. In a statement, Morris and Kim explained the circumstances surrounding their departure:

My decision to depart the band came to a head after this event and numerous other volatile events between Scott Russo and the members of the band and crew throughout the years.

The incident broke out when we were arguing over our bus call after a show. Scott was over an hour late and I had to be home to make my son’s last tee-ball game the next morning. I wasn't expecting to be hit; that’s not the kind of thing I ever thought would happen.

PK's and my decision to leave the band was not something we took lightly and I truly regret having to leave the band in this way. We want to truly thank all of our fans around the world for their love and support over the last two decades. We will miss you all.”

After 15 years of service and gratitude, I have decided to step down alongside Steve Morris from Unwritten Law.  It was a difficult yet easy decision after witnessing the altercation between Scott and Steve. We've had our ups and downs and plenty of fights within this group but this was finally the incident that ultimately led to my decision. I regret to leave in such an unspectacular fashion.

Regardless, my time in Unwritten Law has been one of the most beautiful experiences and one of my proudest achievements.  I just want to say thank you so much to all the fans for the love and support throughout all the years.  I've met so many good people, made so many friends, traveled, and seen things that most people only fantasize about.  I have laughed much and learned more.  Thanks again, you guys rock!

Russo has also issued a statement about the lineup changes, which come on the heels of the release of the band's sixth studio album, Swan:

Steve and PK have left Unwritten Law. Out of respect for them and their families, we waited to make an official statement so that some of the dust could settle.  It all came to a head when Steve and I got into a fight on the last night of our Swan US tour. This was obviously the deciding factor in whether or not they could continue on. Their presence will be missed, but with respect to all past and present, I feel that Swan needs to be heard and that the band must continue on. Unwritten Law is and has been my entire life. Dylan [Howard, drums] and I will be moving forward for our fans around the globe with long time friends,  guitarist Kevin Besignano (ex-Bullets and Octane) and bassist Derik Envy (ex-Red Light Sky) as permanent replacements.

Morris had been with the band for over twenty years, while Kim had played with Unwritten Law permanently since the late '90s.