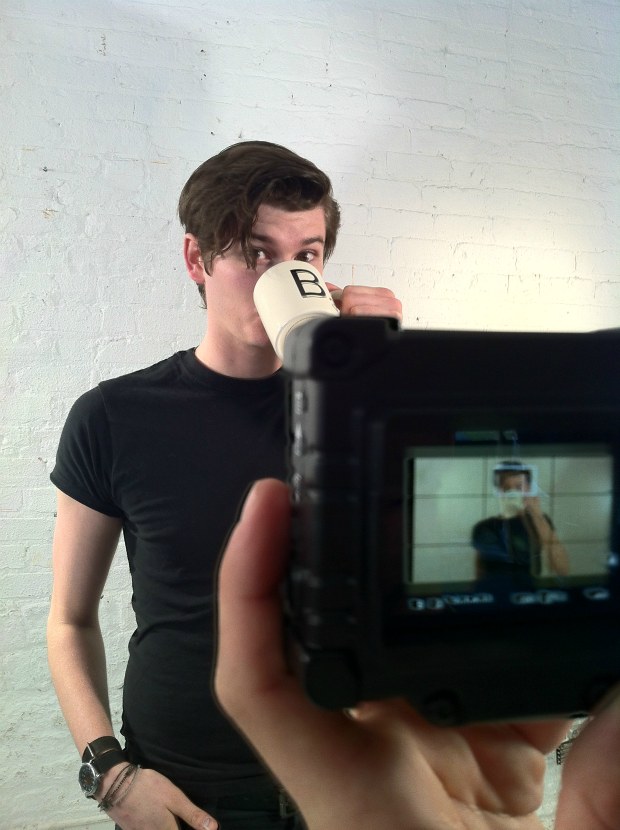 (Above: William Beckett in between takes on the set of the video shoot for “Compromising Me”)

Former The Academy Is… frontman William Beckett filmed a video for the first single, “Compromising Me,”  off his upcoming debut solo EP, Walk The Talk. The EP, which is now available through Beckett's MerchNow store in a variety of bundle deals, will be released April 17.

We caught up with William on the set yesterday for a brief chat.

You're shooting the video for your first single off of your upcoming solo EP #1, is it weird to be shooting a video on your own minus a full band?
Actually, I'm quite used to shooting videos without a full band behind me. My favorite video we did for TAI would probably be for “Everything We Had,” and I was all by my lonesome in that one.

Can you tell us a little bit about the video? A theme? Story line? Car crashes, sex or murder?
All I can say is that we may have administered some questionable human cloning methods during the filming of this video. The rest will have to remain a surprise….

You've been doing a number of shows on StageIt.com, have you been surprised by any fan reactions to your performing solo?
The Stageit.com shows have been a complete blast.  My favorite thing about doing those is that I can perform for people from all over the world at the same time, and particularly for those who haven't seen me play before. I get to play whatever I want. Last week I even played a brand new clip of a song I wrote just a few days before, which I've never done before for fans.  This Sunday (April 8), I'm performing only songs from TAI's last record “Fast Times at Barrington High” and I'm sure some spontaneous shenanigans are bound to take place.

Quick movie question–Ryan Gosling: a new generation's Paul Newman?
Gosling certainly has the acting chops and stoic demure comparable to a young Paul Newman, sure. Can I see an elderly Ryan Gosling releasing “Gosling's Own: Seasonal Salad Dressings”?  One can only pray… alt