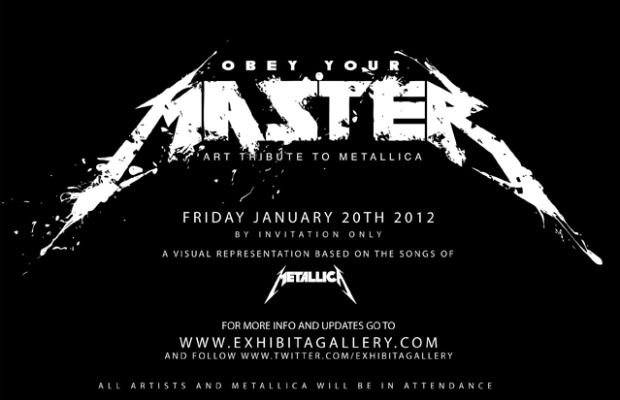 Yesterday, Exhibit A gallery founder/artist Richard Villa III and skateboarder Tony Alva announced the Obey Your Master art exhibit. The exhibit, which opens on January 20, 2012, will feature a variety of artists from the worlds of fashion, film, art, skateboarding and music paying tribute to Metallica. According to a press release, those participating in Obey Your Master draw from diverse wells of inspiration:

For the exhibit, the artists have all chosen a song by the heroes of metal, and will execute their vision in their individual artistic mediums, based on their interpersonal relationship to Metallica’s lyrics and music. The final art pieces will represent each chosen song, and will be revealed on January 20th, 2012 at Exhibit A Gallery to a private reception, with all of the artists and Metallica in attendance. The pieces will be available for purchase starting that evening, through March 23, 2012.