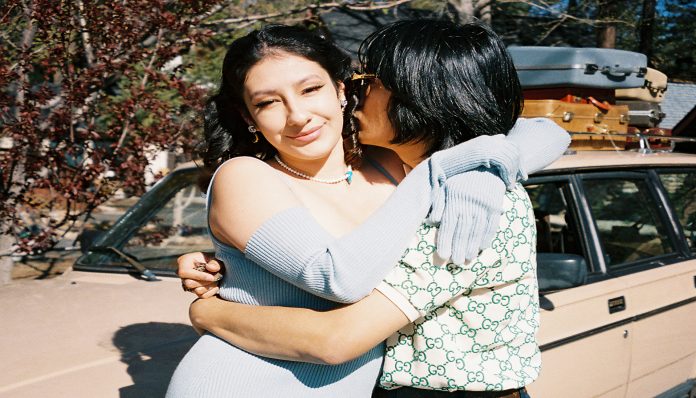 Eyedress has released a new two-song single that showcases both ends of Eyedress’ sonic capabilities. The single includes “Something About You,” featuring Los Angeles-based musician Dent May and “Spit On Your Grave.”

The juxtaposition between these tracks is striking. On the one hand, we have a lighthearted love song filled with groovy guitar riffs in “Something About You.” On the other hand, “Spit On Your Grave” is a high-tempo punk song sure to make you move.

Read more: Oliver Tree is all about “mixing together things that maybe don’t fit”

The dreamy “Something About You” comes with an equally atmospheric music video that features couples spending vacations together while living in a romantic Wes Anderson-esque world. The playful lyrics are matched with brief moments of humor that catch viewers pleasantly off guard, forcing them to giggle as they sway along to the rhythm. The romantic video was directed by Bobby Astro.

“Most of the time my approach is lo-fi, so I have a lot of VHS videos,” Eyedress says about his visual style in an interview with Alternative Press. “There’s something about nostalgia that really draws my aesthetic. I’m really into old films even, and I feel like movies directed by Stanley Kubrick would resonate with the kinds of sounds I’m trying to make. Take The Shining, a really beautiful horror film, but it was shot in a really surreal, beautiful hotel up on the mountains. I try to make my music dreamy and surreal.”

You can watch the music video below.

Eyedress also announced the release of a video for “Spit On Your Grave” will be coming soon on Twitter. The tweet read, “we’re filming the spit on your grave video today and tomorrow”

we’re filming the spit on your grave video today & tomorrow 💦🪦

“I’m an all-around artist,” says Eyedress. I don’t necessarily make one genre of music, but I guess most of my popular songs are on the indie-rock, post-punk side of things. But I also do SoundCloud rap stuff and produce hip-hop music for my friends. I’m not just a singer-songwriter. Sometimes I know when to step back and just make the music. I’m like a DIY artist. Most of my videos, if I’m not directing, I’m really involved. I also add my two cents into everything, even with merch and clothes I design.”

He released Let’s Skip to The Wedding in 2020 under Lex Records. The album is “for everyone who wants to be in a serious relationship … real simp[le] shit,” says Eyedress.

Read more: Eyedress knows exactly what it’s like to make something out of nothing

Eyedress divulged to AltPress about what’s next for him.

“I’m just working on my brand right now,” Eyedress says.  “I’m dropping a new collection. My brand’s called Paranoia. I dealt with a lot of mental health issues growing up, but I’ve somehow managed to turn it into a brand. I have a lot of side projects coming out. I have an album with my friend YUNGMORPHEUS, which will be coming out this year. It’s more like lo-fi hip-hop beats. My friend MORPHEUS does all the rapping. I’m just a producer. My band the Simps are dropping an album this year as well. It’s like an indie, synth-pop-type band.

“I got another Eyedress record on the way full of all types of different songs,” he continued.  “I’m all over the place.I make music with my girlfriend Elvia, but we just release it as Elvia. We recently released a new video. It’s a song about our son called “‘Cotton Candy Skies.’”

The release of the two tracks come hand in hand with the announcement for upcoming tour dates. Eyedress tweeted, “WHO WANNA COME TO EYEDRESS SHOWS? WHAT CITIES SHOULD I VISIT? TIX ON SALE FRIDAY JUNE 4”

WHO WANNA COME TO EYEDRESS SHOWS? WHAT CITIES SHOULD I VISIT?

You can buy tickets here June 4.