Following last week’s announcement of the Hella Mega tour and the unveiling of their ice cream-themed music video for “Dear Future Self (Hands Up),” Fall Out Boy have finally unveiled their forthcoming album’s tracklist.

You can view the full tracklist for Greatest Hits: Believers Never Die – Volume Two below!

Read more: 11 UK pop-punk bands who should be on your playlist

To backtrack, FOB unveiled the new song as a part of the gigantic Hella Mega announcement with Green Day and Weezer.

The three bands announced a massive stadium tour (after teasing it) for the summer of 2020. They all three also announced new albums and dropped new songs.

Now, the official tracklist for the album has been revealed and we couldn’t be more excited.

Check out the album cover and official tracklist below! 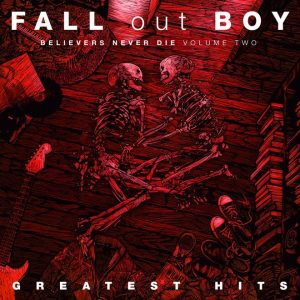 Following the tour announcement, the three bands performed a pop up show in Los Angeles to celebrate. However, before the show, Wentz parked the truck outside Whisky A Go Go on Tuesday Night to serve fans ice cream.

Also, to fit with the theme, the band dropped the “Dear Future Self (Hands Up)” video that’s full of the whole band eating ice cream. It’s a bit trippy, but it’ll definitely make you want to go out for a cone.

Check out the new video down below!

The tour kicks off June 13 in Paris and will run throughout Europe, the U.K. and North America with the Interrupters as support. Green Day will be prefacing the tour with solo appearances in Europe and Asia.

You can check out the full list of cities and dates below.