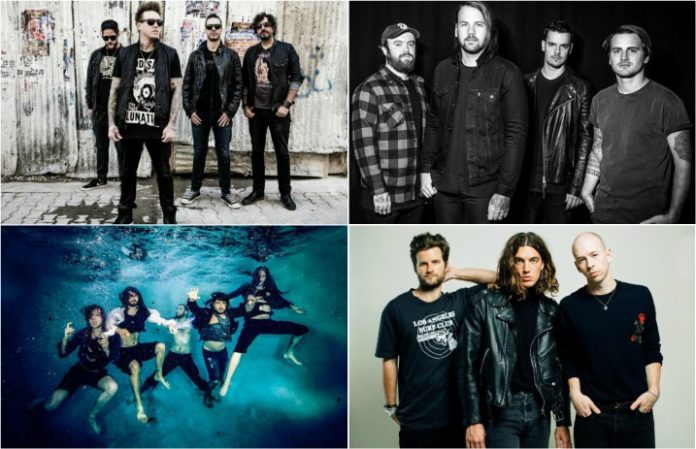 Fall Out Boy announce their tourmate, plus new tunes from Papa Roach and LANY. Check out all of the news you may have missed today below.

Read more: ‘68 announce world tour and other news you might have missed today

Fall Out Boy announce blackbear as support for the 'Mania Tour.'

v excited to announce that @iamblackbear is coming along on the M A N I A Tour this fall! https://t.co/K7GbhguIV9 #FOBManiaTour pic.twitter.com/muRwWPznDw

If you weren't already excited enough for FOB's upcoming tour, the band have just announced that blackbear will be opening up for them. Blackbear put out their newest record, digital druglord April 21.

Papa Roach stream new song “None Of The Above.”

Papa Roach have given fans yet another taste of what they can expect from their next album, Crooked Teeth, which drops May 19. They're now streaming a new song titled “None Of The Above.”

The song comes from the band's new album, No Grave But The Sea, which is out May 26. Preorder it here.

The song comes off of the band's upcoming self-titled debut release, which hits June 30. You can grab it here. LANY will also perform “ILYSB” on Late Night With Seth Meyers May 11.  They'll also be hitting the road this fall.

The band performed their hit “Still Breathing” on the late-night show and are currently touring Australia and New Zealand before hitting up Europe.

The video was filmed in the band's hometown of Columbus and part of their documentary, Beartooth: Live in Columbus. The deluxe edition of the band's recent album Aggressive; comes with a live set, documentary footage, and six bonus tracks. It's available May 26, grab it here.

This is the newest release from the AFI/No Doubt supergroup, who will be releasing their album May 12. You can preorder it here.

The indie-pop duo are currently on tour supporting Pierce The Veil and Sum 41 on the We Will Detonate! Tour 2017.

The Cleveland-based band have debuted their newest music video for their single “Festival.”

Listen to the new single, “Whetstone.”