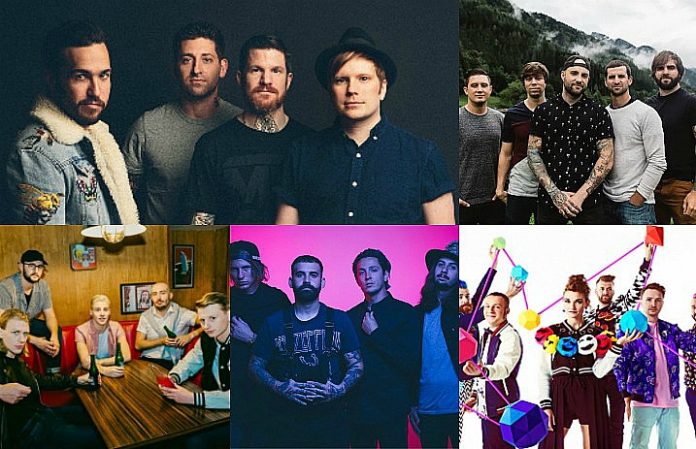 There's a new music video from The Japanese House—plus behind the scene looks from Fall Out Boy and As It Is. There are also new tour dates from Misterwives and The Casualties! Check out the news you might have missed today below!

Read More: PVRIS announce UK and EU tour and other news you might have missed today

1. Pete Wentz gave the lowdown behind the meaning of Fall Out Boy's “Young And Menace.”

The Fall Out Boy bassist offered an inside look at their new video for “Young And Menace” over at ET. The video was directed by Brendan Walter and Mel Soria.

The first single in a few years follows a young girl who is striving to find her identity, although her parents appear as monsters.

“The concept of the video is realizing that your place in the world is maybe not just what you thought it is, or thought it was growing up,” Wentz says. “I grew up as a weird kid in a place where I felt like I didn't fit in. It wasn't until finding punk rock and stuff, that I felt like I found other people who similarly felt like they didn't fit in.”

Fall Out Boy will be touring North America later this year in honor of their upcoming album Mania—due out September 15.

“It's our right to be angry and disenchanted, and it's all right to voice that anger,” adds Wentz. “I kind of was thinking back to when I was going through a lot of turmoil when I was younger. I wasn't sure yet that I figured out what I wanted to say, but I knew I was pissed off and I wanted to say something.”

Watch Wentz's take on the making of “Young And Menace” here!

ABR are taking their decade anniversary gigs overseas this summer, as the Messengers celebration continues at the end of July.

A full range of dates has been announced, featuring stops across UK and Europe. The tour begins on July 28 in London, and will conclude in Paris on August 28th.

The majority of the stops will feature Messengers being performed front-to-back, apart from the handful of festival dates that are also in the mix.

See the entire August Burns Red Euro itinerary in the announcement below! Tickets are available now.

Although they may have just gotten off of the tour of their lives with Panic! At The Disco, Misterwives have revealed their fall plans to revisit much of the country with their Connect The Dots tour.

The group will be joined by Smallpools and Vinyl Theatre, and a few additional dates are expected to be announced soon.

Connect The Dots will be available on May 19, which is this Friday! See the list of shows in the post below. Tickets will go on sale this Friday as well.

4. The Japanese House have premiered a new music video for “Saw You In A Dream.”

The project of Amber Bain, The Japanese House have released a colorfly sleepy video for “Saw You In A Dream.”

“It’s a very clear message: I didn’t want to drown my vocals in too many harmonies this time because the melody is quite strong on its own,” Bain says. “Rather than to hide your sadness about your loss of someone, it’s a nice thing to be like ‘I miss them’. That’s why the vocals are quite present.”

The Japanese House video for “Saw You In A Dream” was directed by Lucy Tcherniak. Enjoy it below!

5. The Word Alive unveiled a handful of headlining dates this summer.

The Word Alive will be playing a few headlining shows surrounding their touring plans with Parkway Drive and Wage War this summer!

Tickets will be available this Friday, May 19. Check out the new dates below!

Read More: Between The Buried And Me announce ‘Colors’ 10-year anniversary tour

6. The Casualties have released a string of new tour dates.

With upcoming appearances at Punk Rock Bowling and It's Not Dead 2, the group will make only one stop on the East coast in New Jersey.

Check out the Casualties' new shows below, and tickets are available here.

7. ROAM are heading out for their last shows of the Backbone era.

With their most recent record Backbone in the rearview mirror, UK's ROAM will be performing their last set of gigs in the album's touring cycle this summer.

Announced earlier today, the band has provided a list of dates as well as a link to tickets via twitter. See all the details you need in the post below.

SUMMER 2017
The last shows of the Backbone era.
Who's coming?
Tickets: https://t.co/ysOoTwQuOL pic.twitter.com/s1J84hSmuV

8. Hidden Hospitals are heading out on a summer tour of their own!

The series of dates will see the group take their dark and captivating music on the road, with many stops listed in both June and July.

The official tour poster can be seen below, and the stops are listed just underneath.

9. As It Is have given us a behind the scenes look at “Hey Rachel.”

Finally today, we got to see an exclusive look behind As It Is' making of their video for “Hey Rachel.” Enjoy the candid scenes below, which feature a cool car and a cute cat!