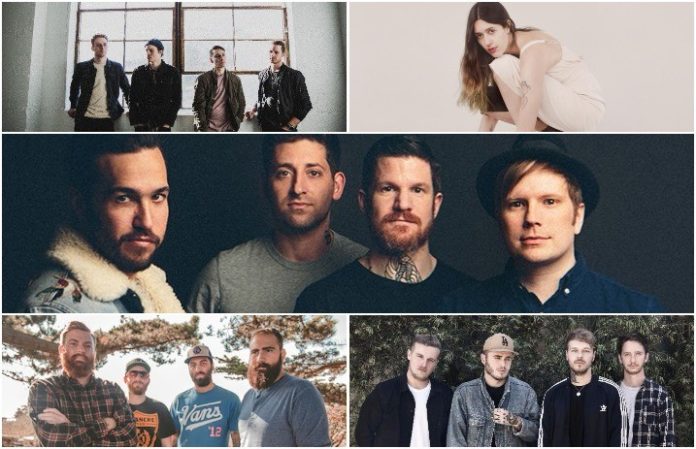 Catch Movements, the Plot In You and MisterWives on the road—plus, don’t miss new videos from Four Year Strong. Check out the news you might have missed today below!

1. Fall Out Boy posted a behind-the-scenes video for their latest music video

Blessing you with the beyond the video for Church �� pic.twitter.com/IefZedxo2o

Fall Out Boy have blessed us with a behind-the-scenes look at their newest music video, “Church.” The track is taken from the band’s latest album M A N I A. You can also catch Fall Out Boy when they hit the road on their Mania tour with Machine Gun Kelly. You can get your tickets here!

It’s about time we go overseas. UK/EU Spring 2018 with @paerish and @musketsuk. Tickets on sale Thursday @ 10 AM GMT. Art by @wkillustration

Movement have announced their plans for their U.K./Europe spring tour, with support from Paerish and Muskets! Tickets for the tour will go on sale this Thursday at 10 a.m. GMT. Don't worry, U.S. fans: You can also catch the guys on tour this March. Grab your tickets here!

Four Year Strong have released their newest music video for “Nice To Know.” The song is taken from the band's latest album, Some Of You Will Like This, Some Of You Won't. The band are set to hit the road on a co-headlining tour with Less Than Jake, and you can get your tickets here!

4. The Plot In You announced an album listening party

We’re hosting a FREE album release listening party on 2/16 at The Society Room at @StAndrewsHall in Detroit, MI. We will be hanging out, listening to the record, taking photos and celebrating the release of our favorite work to date – DISPOSE! pic.twitter.com/sbYdXkNi2d

The Plot In You have announced a free album listening party for their upcoming album Dispose! The show will be on Feb. 16, and fans will be able to hang out, listen to the newest release and take photos with the band. You can get your copy of Dispose here! If you can't make it to the band's show, you can catch the band when they tour with We Came As Romans later this month. Tickets can be purchased here!

5. Half Waif announced a new album

On 4/27, our new album Lavender will be released via @cascine_. Today, you can hear & watch the first single “Keep It Out.” A huge thanks to the brilliant cast & crew for bringing this song to life! Very excited to begin sharing this world with you �� https://t.co/T8WmkHTpZT

Half Waif announced her newest album, Lavender, and released a music video for the lead single off the album, “Keep It Out.” You can preorder your copy of Lavender here! The album is due out April 27 via Cascine. Half Waif is also on tour, and you can see the dates and pick up your tickets here!

See you in July @ynotfestival

Moose Blood have been announced for Y Not Fest! The festival will be fronted by JAMIROQUAI (U.K. festival exclusive), Catfish And The Bottlemen and the Libertines, with the shows happening July 26-29. You can get your tickets here!

Car Seat Headrest shared their latest single, “My Boy (Twin Fantasy).” The track is taken from the band's re-recorded, re-imagined Bandcamp album, Twin Fantasy. The new release will be out Feb. 16 via Matador Records, and you can get a copy of yours here.

Shall we say goodbye to winter and Let The Light In this spring? Hope to reunite so we dance, cry and sing our heart's out together! Tickets on sale Friday! ������������ pic.twitter.com/PoiP0oUXpf

The pop rockers are saying hello to spring in the best way possible: By announcing their upcoming “Let The Light In” tour. Tickets for the shows will go on sale this Friday. The tour will run from April 25 to May 18 with support from Flor and Flint Eastwood. The tour is in support of the band's sophomore album, Connect The Dots. Get your copy of the album here!