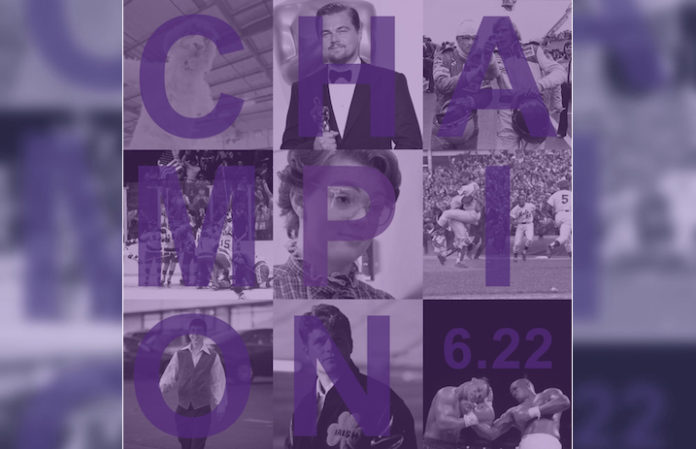 Fall Out Boy have confirmed a June 22 release date for “Champion,” the second single to be issued from their upcoming album, M A  N   I    A. Check out the band's announcement and absolutely epic teaser cover art below.

Following the April 27 release of M A  N   I    A's first single, “Young And Menace,” AP reported that Fall Out Boy's second manic offering, “Champion,” was to be dropped sometime this week. Now, the band have tweeted out this truly inspiring piece of artwork in anticipation of the single's Thursday release:

Is this the final single cover? Are you catching all of the motivating photographs included on each of the image's nine valiant panels?

In the first row, we spot what looks to be a llama, Leonardo DiCaprio accepting his Best Actor Oscar for The Revenant, and former Formula One driver and crash survivor Niki Lauda with fellow racer James Hunt in the '70s.

Second row? We think we're seeing the 1980 U.S. Olympic hockey team (the “Miracle on Ice”), Barb from Stranger Things, and the New York Mets celebrating their win against the Baltimore Orioles in the '69 World Series.

The third and final row is giving us McLovin from Superbad (actor Christopher Mintz-Plasse), Sean Astin as Notre Dame football underdog Daniel “Rudy” Ruettiger in 1993's Rudy, and boxer Buster Douglas' unbelievable upset over Mike Tyson in the historic “Tyson Is Back!” match in 1990.

Did you catch 'em all?

Here's the tweet, with FOB saying the “second wave of M A N I A is coming”:

i am a champion of the people that don't believe in champions. second wave of M A N I A is coming – Champion 6/22 �� pic.twitter.com/qh1KlH4htd