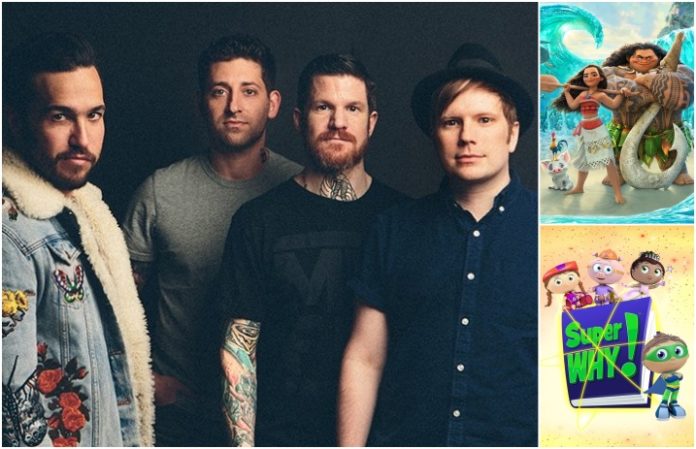 While making their upcoming seventh album, M A N I A, Fall Out Boy apparently weren’t listening to a whole lot of rock music. What they were listening to, however, was children’s TV show and movie soundtracks. On repeat!

Read more: You can actually buy the Fall Out Boy fidget spinner

In a new interview with the Recording Academy, FOB vocalist and guitarist Patrick Stump admits that the band usually “can’t listen to anything else” when they’re recording: “There’s so many mixes and things that you’re going over, exchanging notes, ‘Oh, we’re going to change this and change this.'”

“That, and we’re probably all listening to, like, a different child’s movie soundtrack on repeat,” adds lead guitarist Joe Trohman.

So what kids’ music do the Fall Out Boys rock while deep in the recording process? Apparently, selections like Disney‘s Moana soundtrack and tunes from the PBS Kids show Super Why! make frequent appearances in the group’s respective playlists, thanks to the requests of certain band members’ children.

“I love the Moana soundtrack,” Trohman says. “I listen to it at least 17 times an hour.” As for Stump? “The soundtrack to Super Why! is great,” the singer says.

“Three-quarters of us have little kids,” says Trohman. “So it’s a demand always.”