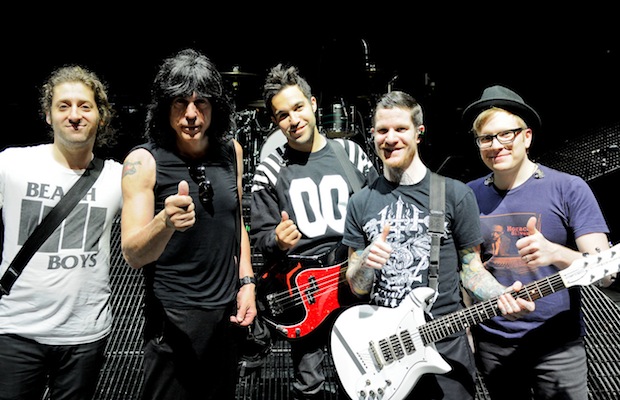 At their inaugural performance at Brooklyn, N.Y.'s Barclays Center on Friday, Sept. 7, Fall Out Boy invited both the Ramones' Marky Ramone and Gym Class Heroes' Travie McCoy to perform as special guests.

Ramone, the longest-running drummer and best-known surviving member of the seminal punk act, performed on the group's classics “I Wanna Be Sedated” and “Blitzkrieg Bop,” while Fall Out Boy drummer Andy Hurley took over guitar duty for singer Patrick Stump.

Below, check out a video of the performance, from YouTube user rochman92:

Later, during an acoustic in the round portion of the band's set, Travie McCoy showed up to perform “Billionaire,” the best-known single from the rapper's 2010 solo debut, Lazarus. Interestingly, McCoy and FOB opted not to perform “Cupid's Chokehold” or “Clothes Off!!,” two Gym Class Heroes singles on which Stump is featured.

Check out a video of the “Billionare” performance:

Fall Out Boy, who appear on the cover of our latest issue, #303, are in the midst of an arena tour of North America to support their latest album, Save Rock And Roll., with Panic! At The Disco and twenty | one | pilots. Here are the remaining dates: