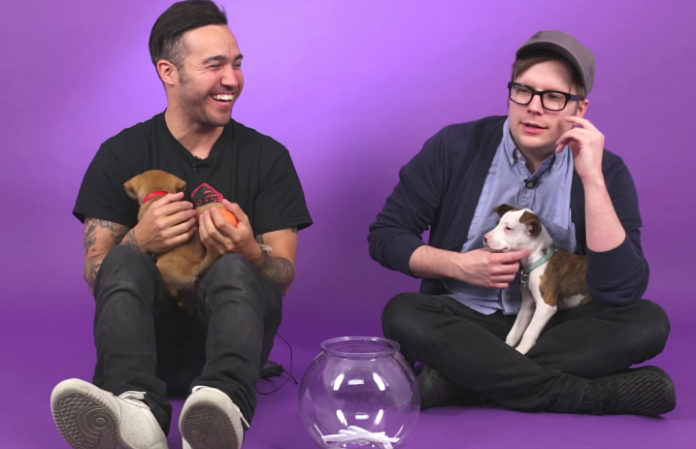 In one of the world’s cutest interviews, Fall Out Boy’s Pete Wentz and Patrick Stump sat down with Buzzfeed (and a BUNCH of pups) to talk more about their new record, that famous Bruno Mars picture, a possible sequel to “A Little Less Sixteen Candles, A Little More ‘Touch Me’” and more. And it’s as cute as it sounds.

They start off the interview talking about their new sound, which Wentz describes as purple, and as Stump explains, this new album is a different direction, but they don’t want to get stuck describing it as a particular sound.

“I don’t know if there is a new sound. Every song is going to be a different thing,” Stump says.

“The record’s not going to sound like ‘Young And Menace,’” Wentz explains.

“It’s not a style. For a long time, I don’t think we’ve been very easy to, if we wrote a song that sounds too particularly like a style, we don’t really use it,” Stump explains.

Plus, they talk about their appearance on One Tree Hill, what songs will be on their tour set list (and how they hope to rotate songs!) and just how expensive it was to create the “A Little Less Sixteen Candles, A Little More ‘Touch Me’” video (all the wire work, of course).

The band dropped “Young And Menace” last month, their first new music since 2015’s American Beauty/American Psycho. The track comes from their upcoming seventh album, M A  N   I   A, which is set to drop Sept. 15. It’s available for preorder now.

They’ll be headed out on a tour next fall in support of the new record, and a full list of cities and dates, along with ticket links, are available here.

In addition to the excitement surrounding the new record and tour, Fall Out Boy are nominated for Artist Of The Year at this year’s APMAs. Vote here now, and be sure to pick up your tickets for the show here before they're gone!

Check out the interview in full below!