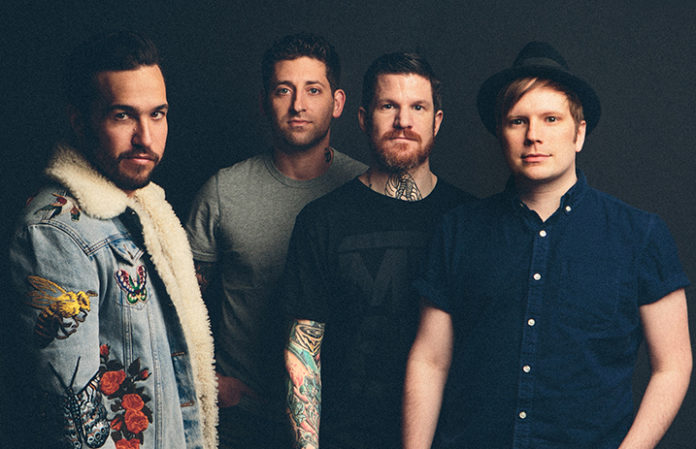 Today, longtime favorites and AP’s newest cover stars Fall Out Boy dropped “Young And Menace,” their first new music since 2015’s American Beauty/American Psycho. The track comes from their upcoming seventh album, M A  N   I    A, and you can hear it below! M A  N   I    A  comes out Sept. 15, but you can preorder it now.

In this issue’s world exclusive interview, the guys discuss how they are striving to redefine their art, their fans and (not surprisingly) themselves. While it’s still too early to tell where they will arrive sonically and psychically, the next level is beckoning and everyone (band included) is going to be very surprised.

“There’s a lyric in the song, ‘trying to send the world a message, I was young and a menace,’ that reminded me of growing up in the suburbs of Chicago. I didn't look like anyone there or feel like anyone – I felt like an outsider in my own town. It wasn't until I discovered punk rock and that community that I realized I did fit in somewhere in this world – with the other people who didn't fit in,” says Fall Out Boy bassist and lyricist Pete Wentz of the reasoning behind the song’s title. “It’s hard to rationalize rage – it’s hard to quantify anxiety… this song does neither, it embraces the wave…”

Of the video, Wentz describes the protagonist’s journey to explore the world outside one she’s previously known. “The concept is the idea of a movie like Elf, where he realizes maybe he isn’t an elf after all, but ours has less comedic elements and more real world implication. She realizes that maybe she is human after all – but maybe the line between us and monsters is blurrier than we think…”

Fall Out Boy began teasing M A  N   I    A last week. They posted a cryptic tweet with a video that linked to a list of addresses for movie theaters in the Chicago area.

At those movie theaters, fans were treated to a commercial, which, at first, looked like it was for “Mania Beach Resorts.” Clips of romantic videos cut to a sign that said “Fall Out Boy” and “4.27.17.”

The following day, Fall Out Boy posted a series of tweets alluding to “purple” and pushed their teasing to April 28, rather than April 27.

Fall Out Boy are nominated for Artist Of The Year at this year’s APMAs. Vote here now, and be sure to pick up your tickets for the show here before they're gone to be a part of the action!

Also in this issue, we sat down with Motionless In White to get a heads up on their new record, Graveyard Shift. We also have our guitarist special, featuring Laura Jane Grace of Against Me!, Frank Iero, Tony Perry of Pierce The Veil, Isaac Hale of Knocked Loose, Awsten Knight of Waterparks and more! Did we mention we have Panic! AT The Disco's Brendon Urie telling us all about his furry friends in ALTPETS, Too Close To Touch giving us the best spots to hit in their hometown for NEXT EXIT and exclusive tour photos from Real Friends?!