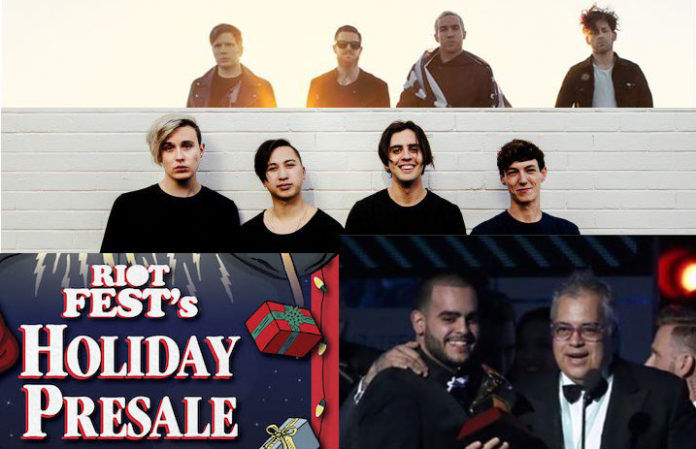 1. Fall Out Boy announced today through Twitter that they will be rereleasing From Under The Cork Tree and Infinity High on December 16. You can preorder them on Amazon here.

got some From Under The Cork Tree & Infinity On High vinyl reissues coming for you on 12/16! pre-order yours https://t.co/lf9hoCxbQV pic.twitter.com/D1xBxpuu41

2. While She Sleeps didn't just announce a new album but a new tour as well.

You Are We will be released on April 21, 2017. Check out their first single from the record “Hurricane” here:

While She Sleeps will be going on a UK Tour starting in April to support the album. Check out the dates and locations:

3. Speaking of amazing UK Tours, With Confidence is hitting both the UK and Europe with Broadside, Safe To Say and Milestones. The band will be playing the entire Better Weather album every show. Check out the dates below:

UK/Europe, how's the weather in February? Cause we're absolutely stoked to say we're bringing our Better Weather headline tour over to you! pic.twitter.com/rBrJyemRNe

4. Hippo Campus announced the release date of their debut album along with the dates for an American tour.

landmark will be released on February 24. The band also released a single from the album — “monsoon.” Check it out:

If you liked what you heard, then you'll like it even better live. Check out when they're going to hit up your town.

5. In case you haven't spent all of your money yet, Riot Fest announced that their Holiday Early Bird tickets will be on sale tomorrow (Nov. 22) at 10:00 a.m. CST here.

Riot Fest will be happening in Douglas Park, Chicago September 15 through September 17.

Read More: Listen to Panic! At The Disco’s beautiful cover of The Weeknd’s “Starboy”

That album won not only Album of The Year, but Best Traditional Pop Vocal Album as well.