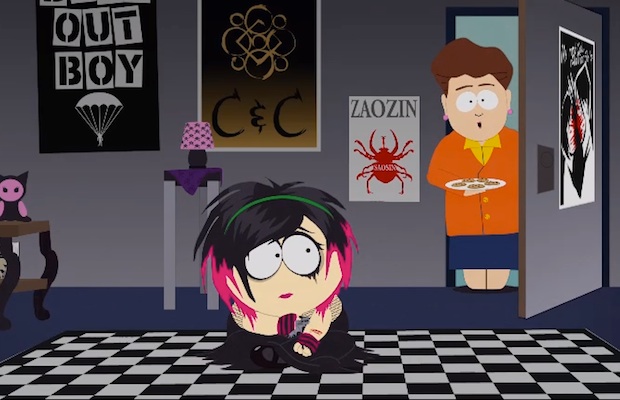 South Park is certainly known for lampooning pop cultural trends, and has never shied away from poking fun at musicians (we even recently brought you a list of AP cover stars who have appeared on the show). Last night, however, the long-running animated series decided to tackle “emo” as whole, in an episode titled “Goth Kids 3: Dawn Of The Posers.”

Discussion on proper or improper use of the term “emo” (and questionable stereotyping) aside, the episode included references to Sunny Day Real Estate, Fall Out Boy, My Chemical Romance, Coheed And Cambria, Soasin, Jimmy Eat World, Hawthorne Heights, and more, many with parody names like “Zaozin” and “My Medical Relationship.”

Below, check out a few of the episode's highlights:

And watch the entire thing for free at South Park Studios.

Many of the musicians referenced took to social media to react. Here are a few of their posts:

So amped to be referenced on the new @SouthPark! Very cool. http://t.co/HZUFaerRLA

This Southpark is already really funny