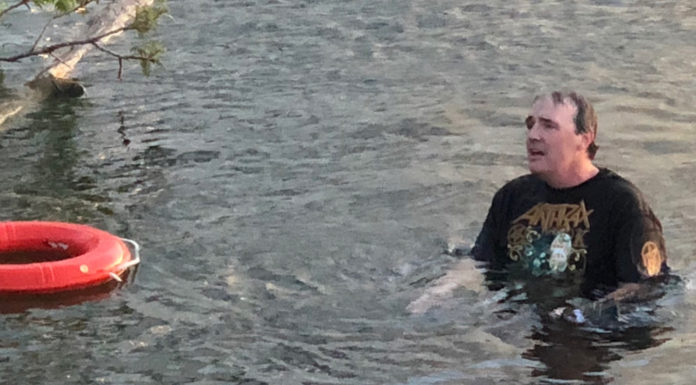 How dedicated are you to your favorite band? Dedicated enough to swim back to a show after getting kicked out?

Slayer are currently on their farewell world tour. During their show at the Budweiser Stage in Toronto, ON, a fan was ejected from the gig for unknown reasons.

Pretty much surrounded by water, the island-centric venue wasn’t super easy to get back into. That being said, the man decided that missing the concert was not on his agenda for the night and attempted to swim back to the show.

Though the police were waiting for him on the other side, the fan made it back to dry land. Due to the possibility of hypothermia, he was immediately taken to EMT services.

Anthrax guitarist Scott Ian posted images of the fan on Instagram, commenting: “Fan of the tour. He got kicked out and tried to swim back in. Swipe left! #commitment #allin #hypothermia.“

Check out all the pictures below:

Fan of the tour. He got kicked out and tried to swim back in. Swipe left! #commitment #allin #hypothermia

You can grab tickets for Slayer’s final world tour (with Anthrax, Behemoth, Lamb Of God or Testament) here.

Would you have tried to swim back to the gig? Sound off in the comments!