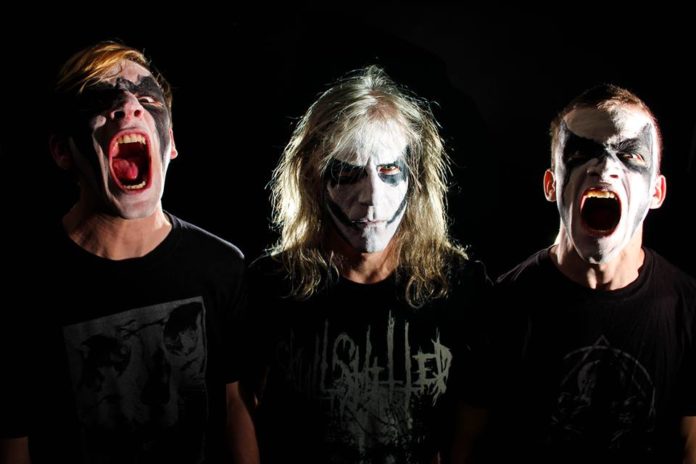 Father-son blackened-grindcore band Vomit Fist have premiered a lyric video for their song “Under The Rind,” over at Revolver. The track is taken from the band's EP Forgive But Avenge, which they will be self-releasing physical copies of on October 28. You can give “Under The Rind” a listen below. Be sure to leave us a comment with your thoughts!

Comprised of 17-year-old drummer Leo “Lurkrot” Didkovsky, his father/guitarist/composer Nick “Vürdoth” Didkovsky and 18-year-old family friend “Skrag the Screecher,” Vomit Fist formed when young Leo proposed the idea of starting a band to his dad in the summer of 2013. Nick Didkovsky commented on Vomit Fist's formation in a recent interview saying, “My son Leo and I have shared a love for metal from the time he was very young. I recall him taking Judas Priest “Painkiller” to school for show-and-tell when he was in kindergarten. Deep roots! We played a bunch of one-offs together while he was in grade school, cover tunes mostly, like ‘School’s Out’ for the fifth grade graduation ceremony, and later some Lamb of God, Black Sabbath, Kiss, etc. His drumming developed into something pretty sick through his experience at Tomato’s House of Rock. So one day, when the idea came about that he and I put a band together, I was really into it, not just because he’s my son, but because he’s such a killer musician.”

Pre-orders for Forgive But Avenge are on sale now.