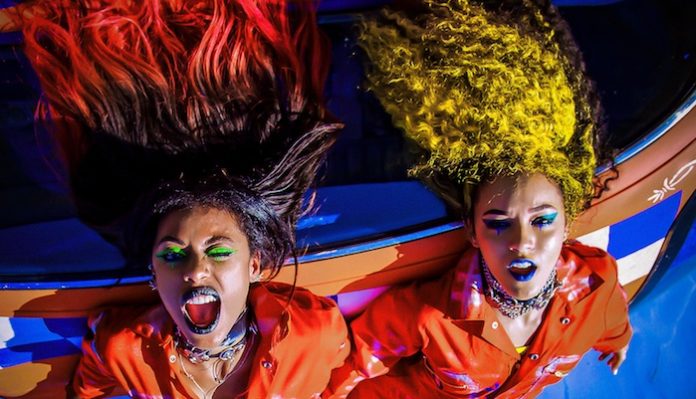 FEVER 333 have announced the first signing to their own label, 333 WRECKORDS CREW. Introducing Nova Twins, the London-based duo of vocalist/guitarist Amy Love and bassist Georgia South, whose alloy of lyrical flow and charging grooves will move your hips and your head.

“The whole idea of the 333 WRECKORDS CREW is to offer a creative alternative to the banal structure of the music industry as well as supporting and propagating art that challenges,” FEVER frontman Jason Butler explains. “Nova Twins are literally the embodiment of this idea. Two black women in rock music twisting the convention of a genre whose only chance of survival is to evolve. Nova Twins are that evolution. Nova Twins are the future. They are so damn important to this music and to the culture, and I’m gonna make sure people see that. I couldn’t be more proud to announce them as the newest addition of creatives to the crew.”

Indeed, Nova Twins are turning things upside down in ways that will make listeners’ eyebrows jump off their faces. Some skillful grafting of hip-hop beats on to titanium-weight riffs with some EDM rinse/drop action. The bottom line here is that whatever aspect of Love and South’s music you gravitate to, you’re not going to stand still. And everybody knows the opposite of life is stasis.

From the funky drumline-meets-Tom Morello grooves of “Vortex” to the pulsing EDM-metal on “Devil’s Face,” Nova Twins intend to carve their name into the veneer of 2020. With influences as diverse as the New York Dolls, O.G. nasty gal Betty Davis, Missy Elliott and hardened electro-dance icons the Prodigy, Love and South weren’t going to remain a London secret much longer.

Nova Twins debut, Who Are The Girls?, is slated for release Feb. 28, 2020. See what made Butler’s head swivel: Check out their tracks and get you a taste of the future.