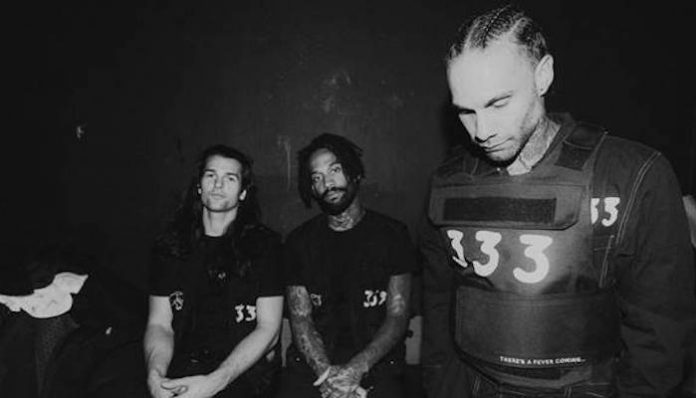 FEVER 333 know how to kick off the week with a bang. The alt-rap activists unleashed new track “KINGDOM” while in the midst of their U.K. run.

Radio 1’s Rock Show with Daniel P Carter premiered the track Sunday night, and it officially made its way to streaming today.

Originally recorded during production for their debut STRENGTH IN NUMB333RS, the track is full-on FEVER 333 through and through. From vocalist Jason Aalon Butler’s impassioned words to the band’s—guitarist Stephen Harrison and drummer Aric Improta—gritty, driving beat, the trio are here to make you take note.

“KINGDOM” follows a remix of “ONE OF US” in October from EDM artist GOLDHOUSE. The band also recently joined Poppy for their highly anticipated collab, “Scary Mask,” which dropped in May. However, the track marks their first new solo release since STRENGTH IN NUMB333RS in January.

Check out the new track here and below.

FEVER 333 just recently started touring again after canceling their September tour dates due to Butler’s health complications. They got back on the road Oct. 4 and have many upcoming demonstrations planned, which you can see below. Tickets are available here.

This year, after a series of unfortunate events, Woodstock 50 officially canceled their upcoming celebration. Now, in wake of the cancellation and in celebration of what the festival should have been, FEVER 333 have announced a pop-up fest of their own.

FEVER 333 then announced they would be holding their own “Wouldstock” taking place Friday, August 16 at The Brickyard in New York.

“In spirit of WOODSTOCK as well as the beginnings of this project we will be having a FREE pop up festival in lieu of the @woodstock at The Brickyard (Chance parking lot) in Poughkeepsie, NY next week August 16. Also- we would like to offer this platform to local artists, activists, community members while we have the chance to.

Read more: Top 10 artists proving genres are a thing of the past including FEVER 333, YUNGBLUD and more

We will be randomly selecting, via Instagram, a few slots on this festival. In order to be considered please post this flyer in your story and/or your feed and post @fever333#wouldstock along with a local charity you would like to raise awareness for. We hope this reminds the community and any others that you do not have to wait and be given permission to activate the change you want to see. We hope this reminds the people of their power. We’ll see you next Friday.⁣”

Check out some snaps of the event below.

The participation, the appreciation, the sense of liberation; we are beyond grateful for the love the people brought to Wouldstock last week. As always- it is because of the people we were granted an opportunity to hold this event. It is because of the people we are able to consider it a success. We want to thank everyone who attended, thank you so much to the beautiful bands and artists, the amazing local businesses, the wonderful charities, the courageous activists, and the power. Thank you all for sharing your power. Maybe we make this Wouldstock thing…a thing? 🤔⁣ ⁣ 📷/🎥: @v.trvn ⁣ ⁣ #FEVER333⁣ #WOULDSTOCK⁣ #THERESAFEVERCOMING⁣ #STRENGHTINNUMB333RS

What do you think of the new FEVER 333 song? Let us know in the comments below.