FEVER 333 are taking their music and activism global later this month for their first-ever virtual tour.

Not only are they releasing a new EP called WRONG GENERATION, but they are also asking the world to join them in their activism for art, justice and equality.

Read more: The internet has a lot of thoughts on Macaulay Culkin’s ‘Home Alone’ mask

“This project is art as activism first,” he shares. “I’m talking about what’s happening and what needs to happen. I hope you understand there’s going to be pain in progress. After dismantling and deconstructing all of these things, we can find a beautiful place to be together. For me, this whole EP is that 13 days after 34 years. You fucked with the WRONG GENERATION.”

Ahead of WRONG GENERATION‘s release on Oct. 23, fans are getting their first taste of the EP on Oct. 19 with the lead track “BITE BACK.” Alongside WRONG GENERATION, FEVER 333 are taking their music and activism global for their first-ever virtual tour.

Read more: This may be the closest thing to a live-action ‘Nightmare Before Christmas’

The livestream tour consists of six ticketed events that will be broadcasted in different time zones around the world. For the WORLD TOUR FOR THE WRONG GENERATION, FEVER 333 are setting the standard for livestream performances. They are implementing never-before-used proprietary audio technology that features the ultimate high-definition sound, allowing viewers to feel like they are in the room with FEVER 333.

Fans first got a glimpse of FEVER 333’s livestreaming capabilities with their groundbreaking LONG LIVE THE INNOCENT virtual event earlier this year. The full-production performance brought in over 300,000 views as FEVER 333 stood in solidarity with Black Lives Matter and played songs off of 2019’s STRENGTH IN NUMB333RS and 2018’s Made An America. 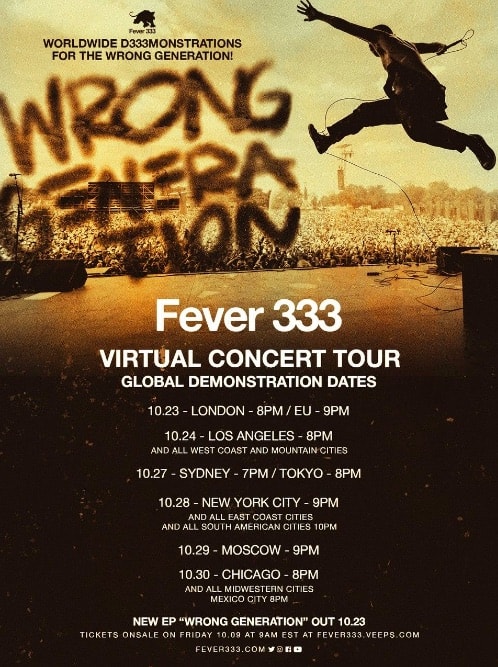 For Butler, he hopes that FEVER 333’s virtual tour offers a new type of live music experience for fans during the coronavirus pandemic. As well, he hopes this new outlet will allow the band to get their message and music out like never before.

“We are so thankful for our allies from all over,” Butler says. “So we wanted to find a way to give back to every part of the world that we were lucky enough to reach during our last album cycle. We want to offer a new type of LIVE experience during this pandemic period. Exclusivity to each region, actual live in the moment filming, no edits, utilizing a brand-new DIRECT audio feed, making each demo feels as live as possible in an era where the traditional live performance is seemingly unachievable. We feel we have a found a way that most closely achieves that essence in a way that has not yet been done.”

The WORLD TOUR FOR THE WRONG GENERATION kicks off on Oct. 23 for the U.K. and Europe at 8 P.M. BST. Tickets for the virtual tour go on sale starting Friday, Oct. 9.

Those on the East Coast, however, are getting exclusive access to tickets before anyone else. Pre-sale tickets for the East Coast/New York date on Oct. 28 can be purchased with the presale code FEVER333AP here.

1. BITE BACK
2. BLOCK IS ON FIRE
3. WRONG GENERATION
4. U WANTED A FIGHT
5. WALK THROUGH THE FIRE
6. FOR THE RECORD ft. Walter Delgado of Rotting Out
7. LAST TIME
8. SUPREMACY

The full list of FEVER 333’s global virtual tour dates is below.

Which date of FEVER 333’s virtual tour are you tuning in for? Let us know in the comments below.