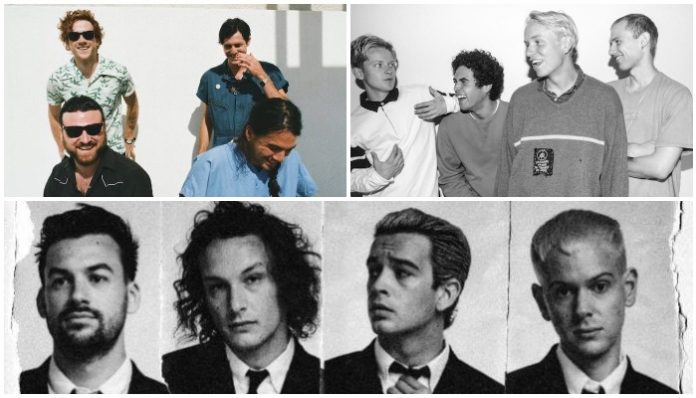 SWMRS and FIDLAR are pairing up for a sweet joint cover of the 1975‘s track “People” off of their upcoming record Notes on a Conditional Form.

The two bands gave their take on the track which is less than a year old and marks the first bit of music available from the 1975’s new album.

The song was originally released by the 1975 back in August 2019. Frontman Matty Healy stated in an interview at the time that the song was a definite step in a new direction for them.

“It’s not like a where emo ended up sounding record like My Chemical Romance, Fall Out Boy sounding record. There’s definite references to Joan Of Arc and Braid and Mineral… you hear a lot of that on No Rome’s new EP, it’s kind of like an emo record and I played drums on that and we were making that the same time we started Notes On A Conditional Form, so it does have this kind of like, Midwest kind of sound to it.”

The new cover also comes along with a visualizer video with tons of black and white photos of the band’s.

You can check out the cover track in the player below.

Read More: Frankie Palmerie on past Emmure lyrics: “I reject the person I was”

SWMRS also recently gave us an update on the condition of guitarist Max Becker last month following the news that he is getting better after a serious van crash.

With the Cage The Elephant tour and the Japan shows announced and coming up quickly we wanted to give you a brief update! While it is a miracle how well Max is doing, its still going to take a bit of time for him to be able to join us for shows.

Not sharing the stage with our conductor will be a weird feeling. Max is working with us to make sure we are ready to go & came up with a FIRE setlist. Cole, Seb, Henry & Joey will be there as usual and Jakob will be stepping in for Max for all upcoming shows until he’s healed up

What do you think of SWMRS and FIDLAR’s new cover of the 1975’s “People”? Let us know your thoughts in the comments below.