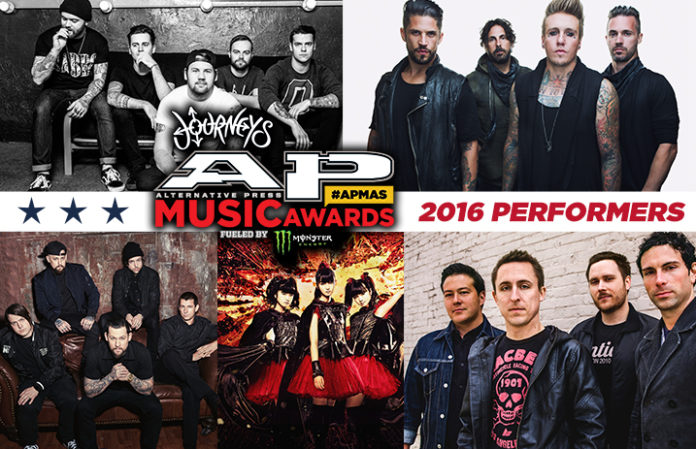 Good Charlotte, Yellowcard, Papa Roach, BABYMETAL and Beartooth are the first of many performers to be announced for the 2016 Journeys Alternative Press Music Awards, Fueled by Monster Energy. This year’s APMAs, hosted by Alex Gaskarth and Jack Barakat of eight-time AP cover stars All Time Low, will broadcast live the evening of July 18 from Schottenstein Center in Columbus, OH.

Get your tickets now.

Tickets are on sale via Ticketmaster here, and VIP experience packages are available now via SoundRink. Tickets start at $49.99. SoundRink VIP packages will include limited merchandise, elite access to the red carpet, prime seating and VIP meet and greets.

Read more: And the nominees for the 2016 APMAs are…

The APMAs is offering a select number of Monster Package tickets, which will offer purchasers an unforgettable experience and the best seat in the house: a floor table amongst the stars! Monster Packages also include the same benefits offered to VIP purchasers, as well as two nights (one room) at a premier local hotel. Visit this link to purchase Monster Packages.

Within just 24 hours of voting for the APMAs opening, fans more than doubled the first round voting numbers within the first 24 hours in 2015. Votes were cast from 128 countries around the world (including all 50 U.S. states).

Read more about the performers below:

Good Charlotte will be honored with the very first Classic Album Award, presented by Eleven Seven Music. The APMAs will salute their 2002 breakthrough album, The Young and the Hopeless, which has sold more than five million copies to date. The album featured their breakthrough singles “The Anthem,” “Lifestyles of the Rich and Famous” and “Girls & Boys.”

“AP has been such a part of our history, and has had an impact on so many other bands as well,” says Benji Madden. “We are excited to come and celebrate that history and be a part of the award show. Especially this year as we've decided to come back with GC, celebrating 20 years as band, It means a lot us, to be given such a special platform to reconnect with our fans and share our new record, Youth Authority, with everyone on such a big night.”

Fellow 2000s pop-punkers Yellowcard are being honored with the first Vans “Off The Wall” Award. This award honors a band that exhibits and inspires creative expression. Since 1997, Yellowcard have always played by their own set of rules while creating an impressive legacy of pop-punk anthems, catchy choruses and, of course, violin.

“We are truly humbled to be asked to be a part of the show and to be honored with this special award,” shares Ryan Key. “Alternative Press has been such a huge support not only for Yellowcard, but for all the bands in this scene.”

For nearly two decades, Papa Roach have led the pack with countless top-charting singles, successful tours and millions of fans worldwide. The band was first honored by Alternative Press as cover stars of issue #147 (October 2000).

“We are super excited to be part of the third annual APMAs,” says vocalist Jacoby Shaddix. “The line-up this year is sick, plus, the magazine has been a huge part of keeping the American punk, rock and metal scene alive all these years. Plus, we got some tricks up our sleeves for this one. It’s gonna be dope.”

BABYMETAL have taken the world by storm with their infectious brand of pop metal. This year, the band is nominated in the Best International Band category. The APMAs will mark their first U.S. award show. Their new album Metal Resistance released April 1 via RAL/Sony Music Entertainment.

“I am extremely thrilled that BABYMETAL is nominated among a great list of other bands for Best International Band,” says SU-METAL. “I am above ecstatic seeing how we have been able to connect with our fans from across the globe through our music, surpassing language barriers and just making it to far places all over the world on our tours. I just hope that we, BABYMETAL, will be able to continue to bring our music to more people worldwide, here on out.”

Hailing from the home of the 2016 APMAs–Columbus, OH–local heroes Beartooth have been making waves over the past few years as a strong up-and-coming force in the metalcore scene, rapidly advancing from local basement shows to tours with bands such as Bring Me The Horizon, Atreyu, Slipknot, Pierce The Veil and Sleeping With Sirens, and performances at festivals like Rock on the Range, Reading & Leeds and Carolina Rebellion. The band haves been nominated for three awards–Best Vocalist, Best Live Band and Artist Of The Year presented by Monster Energy–at this year’s APMAs.

“Pretty crazy to be nominated for three awards this year and be able to play some music live,” says Shomo. “It's always a fun time at the APMAs. Tons of good friends, good hangs and everybody is partying their ass off!”