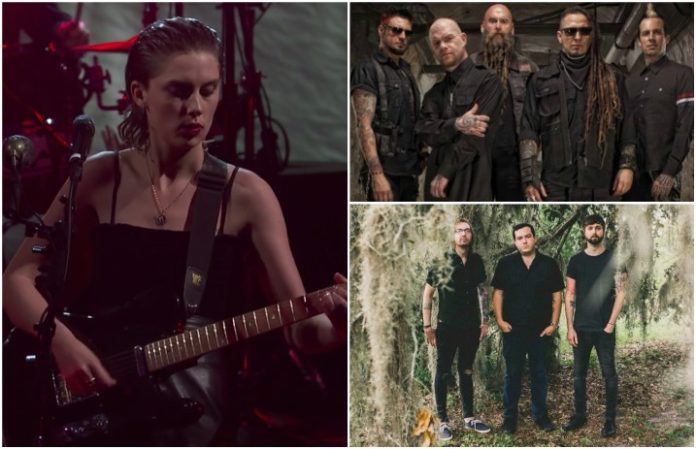 Watch new music videos from Five Finger Death Punch, We Were Sharks and Better Love —plus, don’t miss tour announcements from the Dangerous Summer. Check out the news you might have missed today below!

Read more: This new Netflix series is being praised as the next ‘Stranger Things’

Heavy metal outfit Five Finger Death Punch have debuted a lyric video for their cover of the Offsping's “Gone Away.” The cover comes from the band's greatest hits set, A Decade Of Destruction, which dropped today. You can order it here.

Rock band The Dangerous Summer have announced who will be supporting them on their North American tour, kicking off in Jan. 2018. They will be supported by Atlanta rockers Microwave and Memphis-based the Band Camino, and you can get tickets here.

London rock band Wolf Alice performed “Sadboy” on The Late Show with Stephen Colbert. The song comes from their 2017 record Visions Of A Life.

4. Two Door Cinema Club, You Me At Six, Circa Waves and more announced for London festival Community

The first lineup additions have been announced for London's Community music festival. Two Door Cinema Club, You Me At Six, Circa Waves and the Vaccines will all perform, as well as Rat Boy, Sundara Karma, Pale Waves and Tom Grennan. The festival will take place on July 1 in Finsbury Park, and more lineup announcements are still on the way. Tickets go on sale Dec. 4 and you can buy them here.

Canadian power punks We Were Sharks have debuted a new music video for “Stay,” a track from their forthcoming record Lost Touch. The band recently signed to Victory Records and will release Lost Touch on Feb. 23. We Were Sharks' US tour begins next week, and you can pre-order their record here.

Chicago rockers Better Love have debuted a new video for their track “Sunday's Best.” The band will be releasing an EP early next year.

Denmark festival NorthSide have announced singer-songwriter Beck as their headliner for 2018. He will be joining Björk, Queens Of The Stone Age, Tyler The Creator and more in the lineup. The event will take place in Aarhus, Denmark, June 7-9, and you can buy tickets here.

8. Promise Of Redemption, the solo project of Valencia’s Shane Henderson, released Before & After (Demos and B-Sides)

Before & After is a collection of songs that were written during and immediately following the When The Flowers Bloom…-era of Promise of Redemption.

The album features Jule Vera-renditions of classic and loved holiday tunes, including: “Last Christmas”, “All I Want For Christmas” and “Sleigh Ride.”

Watch more: These are the best alternative artists ever, volume 2