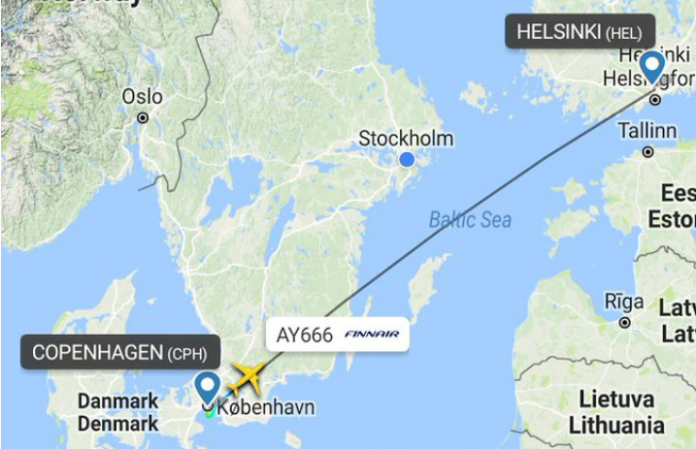 You board a plane on Friday the 13th on your way to HEL and your flight number just happens to be 666—if this doesn't sound like the start to a scary movie, I don't know what does.

Passengers were in for one HEL (pun intended) of a ride when they boarded Finnair Flight 666 on their way to Helsinki, Finland who's call letters just so happen to be HEL.

The air traffic schedulers who assigned the flight number either had a twisted sense of humor on the most superstitious day of the year, or they're some serious metalheads who had a good chuckle.

This isn't the first time Flight 666 has flown to HEL and back on Friday the 13th. This past January a similar situation occured in which Pilot Juha-Pekka Keidasto told RT, “It has been quite a joke among the pilots. I'm not a superstitious man. It's only a coincidence for me. If there's some passenger who is anxious about this 666, our cabin crew is always happy to help them.”

It's 13 o'clock on Friday the 13th and @Finnair flight 666 is getting ready to fly to HEL https://t.co/ZAB2dO7aof pic.twitter.com/9PHZmGAOdM

Some of this still seemed a little too coincidental, so who can really blame this guy for “missing” the flight?

Flight 666 to HEL is flying without the passenger in seat 13F as @FR24mike missed the flight. https://t.co/3bmV3dKVwp

Just when you thought things couldn't get any more metal, the Helsinki Airport made sure the passengers of Flight 666 were well taken care of upon their arrival in HEL.

Hi there! We have something better in opur mind: our heavy metal themed bus will give one HEL of a ride for #AY666 passengers! pic.twitter.com/Ai8FVqv4qq

Breathe easy, the plane landed safely and all passengers were accounted for.

Would you board Flight 666 on Friday the 13th? Let us know in the comments below!