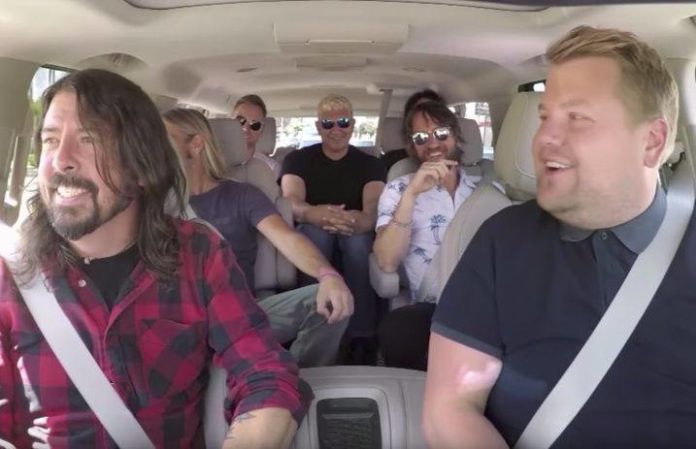 [Photo by: The Late Late Show With James Corden/YouTube]

Carpool Karaoke is easily one of the best internet segments, and with Foo Fighters featured in the latest episode, we knew it had to be good.

The band sang some of their biggest hits, ended up in a Guitar Center and, well, clearly had the time of their lives, with host James Corden rocking out just as much as the Foo Fighters themselves.

Of course, they jam some of their biggest hits, including “All My Life”, “Best of You”, and “Learn to Fly,” along with “The Sky Is A Neighborhood,” taken from their new LP, Concrete And Gold. Not only do they have amazing karaoke pipes, but they have the best air drumming skills we have ever seen. (Not even kidding.)

The band talk about how they were a bit starstruck when they first connected with Dave Grohl (“He’s the guy from Nirvana?!” joking, of course) and much, much more.

And could we forget to mention the portion where they crash a Guitar Center, have a drum-off between Corden, Grohl and Taylor Hawkins, and create a stage and cover Rick Astley’s “Never Gonna Give You Up.”

Essentially, it’s an epic episode that you won’t want to miss. Watch it here!

Concrete And Gold was released Sept. 15. Foo Fighters' last full-length album was 2014's Sonic Highways, and they released their Saint Cecelia EP in 2015.

What are your thoughts on this epic episode? Let us know in the comments below!