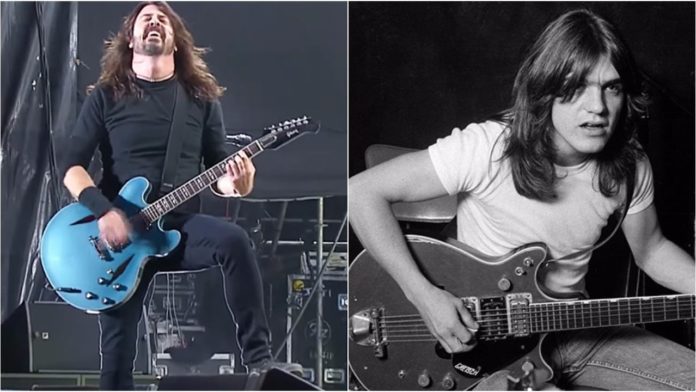 Musicians have been paying tribute to AC/DC's Malcolm Young, and Foo Fighters dedicated their performance in Mexico City to the late AC/DC guitarist and co-founder. In fact, they opened their show with an electric cover of AC/DC’s “Let There Be Rock,” which you can watch below.

Young, the rhythm guitarist and co-founder of AC/DC, died on Saturday at the age of 64. In the video, you'll see Young's face as the backdrop with Foo Fighters sharing a powerful cover of AC/DC's “Let There Be Rock.”

“We're going to play some rock 'n' roll for Malcolm Young tonight,” Dave Grohl shares before blasting into the track.

Watch the powerful performance below:

Not to mention, Grohl shared a heartfelt message about Young's impact on his own career. “That film, a live AC/DC performance from Paris, 1979 is everything that live and roll should be,” he says on Let There Be Rock. “Sweaty. Loose. Loud. A relentless performance from the perfect band.”

Read his message in full below:

And he's not the only artist to pay tribute. Josh Homme recently recalled how AC/DC's Malcolm Young inspired his guitar playing when starting Queens Of The Stone Age.

“I wanted to see what it was like when you just played one thing until you got lost in a trance,” says Homme. “One note is so much more difficult than 50. That’s what I learned in [the Screaming Trees] because I was playing rhythm. I was trying to play like Malcolm Young, trying to play a riff like a robot.”

Young's death on Nov. 18, after a battle with dementia, prompted a cascade of tributes to the AC/DC guitarist, including that of his bandmate Brian Johnson, the Australian rock band's lead vocalist from 1980 until 2016.

“For 32 years, we stood side-by-side on stage,” Johnson remembers of the renowned guitarist. “I am saddened by the passing of my friend Malcolm Young; I can't believe he’s gone. We had such great times on the road.”

Young was a songwriter, guitarist and performer that inspired so many from our scene, creating a legacy that will continue to live on for many years to come.