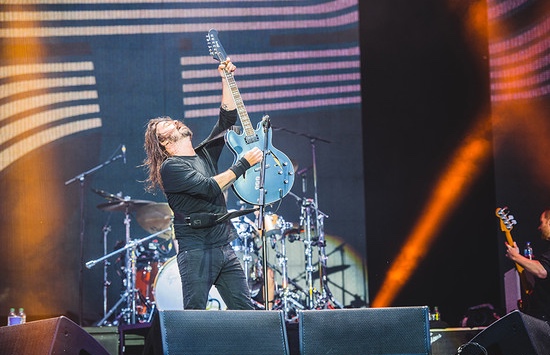 Foo Fighters headlined BottleRock Festival in Napa Valley last night, and during their performance of “Everlong,” organizers pulled the plug on the band—but they stuck around to finish their final song with the help of their fans.

Check out the footage from the performance below!

Read more: This world map is made of 1,200 songs, including tracks from Green Day, Weezer, Foo Fighters, more

According to Billboard, the festival has a strict 10 p.m. curfew, meaning that although they had a two-hour headlining slot, the promoters “promptly shut down the speakers and video screens,” according to the San Francisco Chronicle. They also report that the Cure was unplugged in 2014 because of the curfew.

Although their set got cut short, the crowd seemed to have had an amazing time. Check out the video footage (filmed by Steve Zanco) from their “Everlong” performance below!

Back in February, the band surprised fans attending a secret show in England—also their first show in over a year—revealing that they'll be headlining Glastonbury Festival this summer, while also debuting two new songs “Keep Your Pretty Promise to Yourself” and “Run With Me.”

What are your thoughts on their “Everlong” festival performance? Let us know in the comments below!