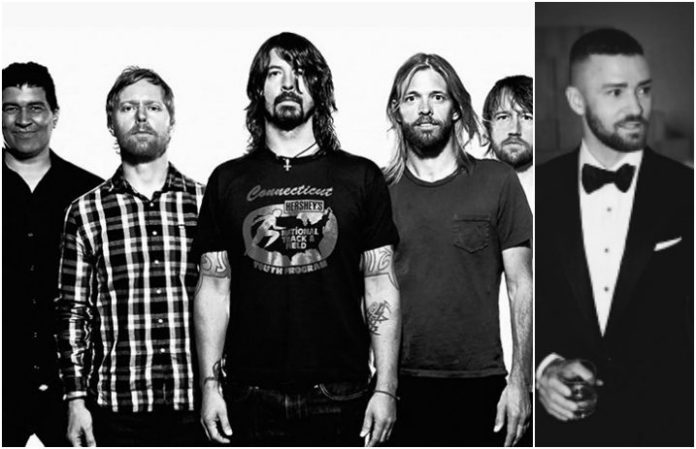 Dave Grohl previously told BBC Radio 1 that “the biggest pop star in the world” would be featured on the Foo Fighters' new album, Concrete And Gold, in addition to all the other amazing guest collabs already announced, including one of the members of Boyz II Men.

And it looks like we know who that guest collaborator is: Justin Timberlake. Oh, and Paul McCartney, too.

In an interview with Rolling Stone, Grohl reveals that not only is Timberlake guesting on the album, but they’re basically pals now. “We'd drink whiskey in the parking lot,” Grohl says. “He was really, really cool. Then the night before his last day, he says, 'Can I sing on your record? I don't want to push it, but—I just want to be able to tell my friends.' ”

Grohl says he nailed it, which we can only expect—and we can’t wait to give it a listen.

Not to mention, Grohl tells Rolling Stone that the most exciting guest on the record was Sir Paul McCartney. It all began when he texted McCartney, asking: “Do you want to play drums on one of our new songs?”

And McCartney has the most fitting response: “You're crazy, man!”

Of course, he agreed, with Grohl explaining that McCartney played two takes, and they used the first. “He was so fucking good,” Grohl tells Rolling Stone.

With a Boyz II Men collaboration already revealed in addition to McCartney and Timberlake, the band's new record is shaping up to be a seriously star-studded affair.

Concrete And Gold is set to be released Sept. 15. Foo Fighters' last full-length album was 2014's Sonic Highways, and they released their Saint Cecelia EP in 2015.

How excited does this make you for Concrete And Gold? Let us know in the comments below!