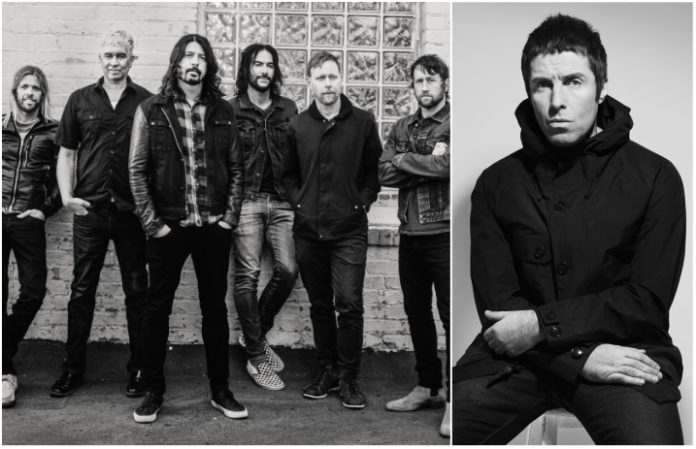 Foo Fighters' triumphant Cal Jam performance last year, which saw the band covering the Beatles with Liam Gallagher, apparently set off the spark of collaboration for Dave Grohl and crew. According to the former Oasis lead singer, the Foos can't stop bugging him for an in-studio collab.

Gallagher, who released his debut solo album As You Were last October, says Foo Fighters have been itching to record a song with him ever since their live “Come Together” send-up. The “Wonderwall” singer sounds interested—it's just that he's simply too busy with his own stuff at the moment.

“They keep texting me, man,” he tells the NME in a new issue this week. “They wanted to do one tune, but I dunno—I'll do it one day, but I'm too busy doing this at the moment. But I do like them—I think Foo Fighters have got good tunes. I think Dave Grohl's very talented, and so is the band.”

The admiration is apparently mutual, as Foo Fighters drummer Taylor Hawkins places the English singer in the same echelon as late Queen vocalist Freddie Mercury, often regarded as one of the greatest rock singers.

“I'll tell you something about Liam Gallagher,” the drummer says. “That guy is such a fucking good rock good singer. When people talk about Freddie Mercury, they're like, 'Oh my God, he's so outrageous'—a lot of people just skip past the actual thing of what it is that made them great. I watched that Oasis documentary [Supersonic] the other day, and there's this part were he just sings 'Champagne Supernova' in one take in its entirety, and you just go, 'oh fuck,' you know, the reason we all liked him in the first place is because he's a fucking good singer. He can fucking sing a rock 'n' roll song, dude.”

Here's to Gallagher and the Foos comin' together on a new tune soon.