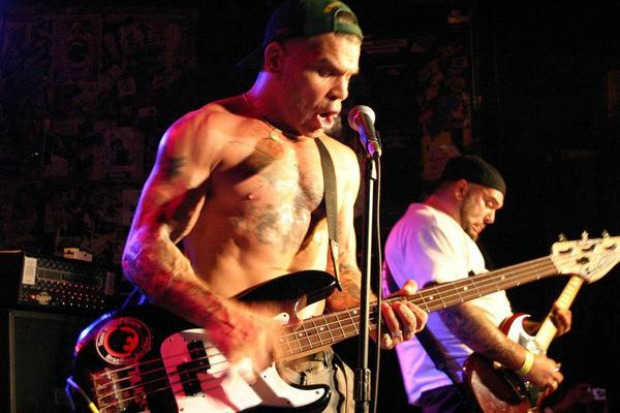 It is being reported that former Cro-Mags bassist Harley Flanagan has been arrested after a stabbing at tonight's CBGB fest. One of the victims is allegedly Cro-Mags bassist Mike Couls (ex-Cold As Life). Read a statement from Bowery Boogie, who were in attendance, below on the situation along with some photos here.

“We were watching the hardcore show at Webster Hall – featuring Sick of it All, Cro-Mags, and VOD – when all hell broke loose upstairs. Harley Flannegan, founding member of the Cro-Mags stumbled into the VIP lounge with a knife. Security mobilized in a hot minute and beat the shit out of him. It took no less than six beefy dudes to control the madness. Blood was everywhere, and bone protruded from his shin.

Cops quickly appeared and took him away in cuffs. Not before he had already stabbed some dude in the chest (said victim left the scene with a bandage over the wound). Because of the violence the rest of the show was canceled. The remaining bands promised to reschedule the show. To be fair, Webster Hall security contained the situation professionally. Lots of drunken, pissed off hardcore fans were on edge after the cops shut down the show, but the scene was cleared without further incident.”

We will keep you updated as new information arises.