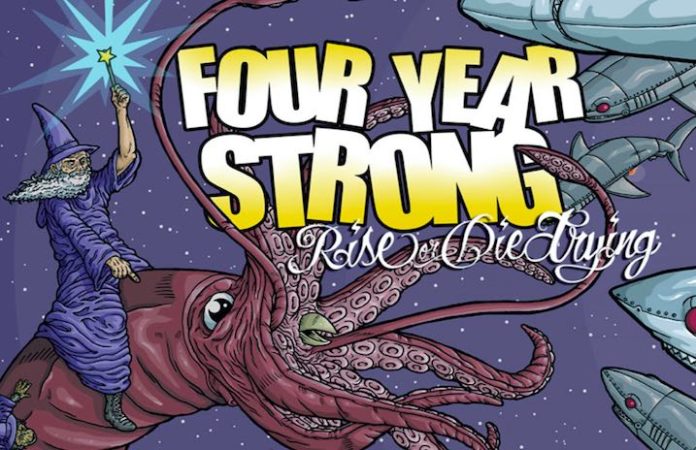 Four Year Strong are continuing the tenth anniversary celebration of their sophomore record. The band just announced dates for the first U.S. leg of the Rise Or Die Trying world tour.

Support comes from Can't Swim, Light Years and Sleep On It. Check out the routing for part one of the Rise Or Die Trying U.S.A. takeover below!

Tickets will be on sale this Friday, Jan. 13 here. Four Year Strong are playing the record in its entirety at each show.

Four Year Strong previously announced the first leg of the Rise Or Die Trying tenth anniversary world tour, slated to hit the U.K. and Europe later this month. They promised many more announcements to come.

About the announcement, Four Year Strong says, “In 2007, we put out a record called Rise or Die Trying, starting us down a path that would lead us all over the world, and drastically change our lives. With 2017 marking the 10-year anniversary, it's time to say thank you.”

The band adds, “Keep a look out for more shows being announced later in the year.” Read the full statement below.

Massachusetts natives, Four Year Strong formed in 2001. They released their debut record, It's Our Time, in January 2005. Rise Or Die Trying would follow, releasing in September 2007 via I Surrender Records.

“In 2007 we put out a record called Rise or Die Trying, starting us down a path that would lead us all over the world, and drastically change our lives. With 2017 marking the 10 year anniversary, it's time to say thank you. Thank you to everyone that came outand supported our young band, thank you to everyone who still goes crazy at shows when we play RODT songs, and thank you to a record that gave us these last ten years.

Over the next year we will be announcing Rise or Die Trying 10 year shows all over the world where we will be playing the record front to back. Today we announce the first set of dates in the U.S. We are doing these shows at smaller, intimate venues to really make it something special. Shout these songs with us. Take the stage. Jump on it. Jump off it. This is for you.

Keep a look out for more shows being announced later in the year, if these don't come near you and for some special events as well. So come out and get crazy with us as we play the record that brought us to you in the first place. Rise or Die Trying.”