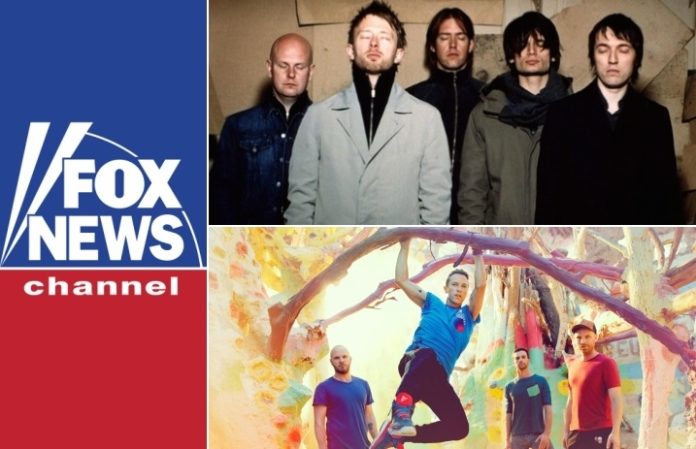 Fox News is continuing its absurd grievance with Radiohead, branding the English rock band the “poor man's Coldplay” after earlier labeling the band's fans as “strange, malnourished and sad.” Watch the video below.

As we previously reported, Fox News personality Kat Timpf started grillin' up her Radiohead beef a few weeks ago, when discussing the band's Rock & Roll Hall Of Fame nomination. Although Kampf said Radiohead “should get in” to the HOF, she qualified that statement with shade, indicating that the nominations are about “fame, not talent.” Not satisfied with simply igniting a Radiohead feud, Timpf went on to, um, make the band's HOF nom about her.

“I don’t even like [Radiohead] but the kind of guys that I like have to be three things: strange, malnourished and sad,” Timpf said on the Oct. 7 broadcast of Fox News' The Greg Gutfeld Show. “And those guys always like Radiohead! I had to pretend to like Radiohead for years to get these men, even though the music is just elaborate moaning and whining over ringtone sounds.”

Now, Fox News is doubling down on its Radiohead hate. On Oct. 21, Timpf again appeared on the Gutfeld show, and she actually seemed somewhat apologetic for her previous comments. “[Radiohead fans are] all very, very mad at me. But I wasn't saying it was bad, I was saying it was sexy,” Timpf attempted to deflect. “Also, in what universe am I not strange, malnourished and sad?”

Well, host Greg Gutfield apparently wasn't having any of this backpedaling from Timpf, and he went all in on a doozy of an alternative fact. “Radiohead [are] a fine band but they stole everything from Coldplay,” Gutfeld said.

Gee, it's not like Fox News to get the truth completely ass-backwards, is it? I mean, come on, at least know your basic alt-rock timeline before making outrageous claims like that. In what universe does Coldplay even exist without Radiohead as their “moaning and whining” forebears?