Frank Iero is participating in a charity auction to win a signed, smashed guitar that he played at some point in the early to mid-2000s. The My Chemical Romance, Frank Iero and the Future Violents, Pencey Prep and Leathermouth star donated the guitar to Innocent Lives Foundation.

The Innocent Lives Foundation’s mission is to unmask anonymous child predators and bring them to justice.

Iero donated the MCR era guitar (which is a red Epiphone Dot) in order to raise money for the organization. Iero confirmed with AltPress that the guitar is likely from a tour during the Three Cheers For Sweet Revenge era and is what he used before switching to his signature white model.

The guitar is signed by Iero, with a letter of authenticity. It will ship in Frank’s case, as well as a secure box. Check out some pictures of it, as well as a video of Iero talking about it below. 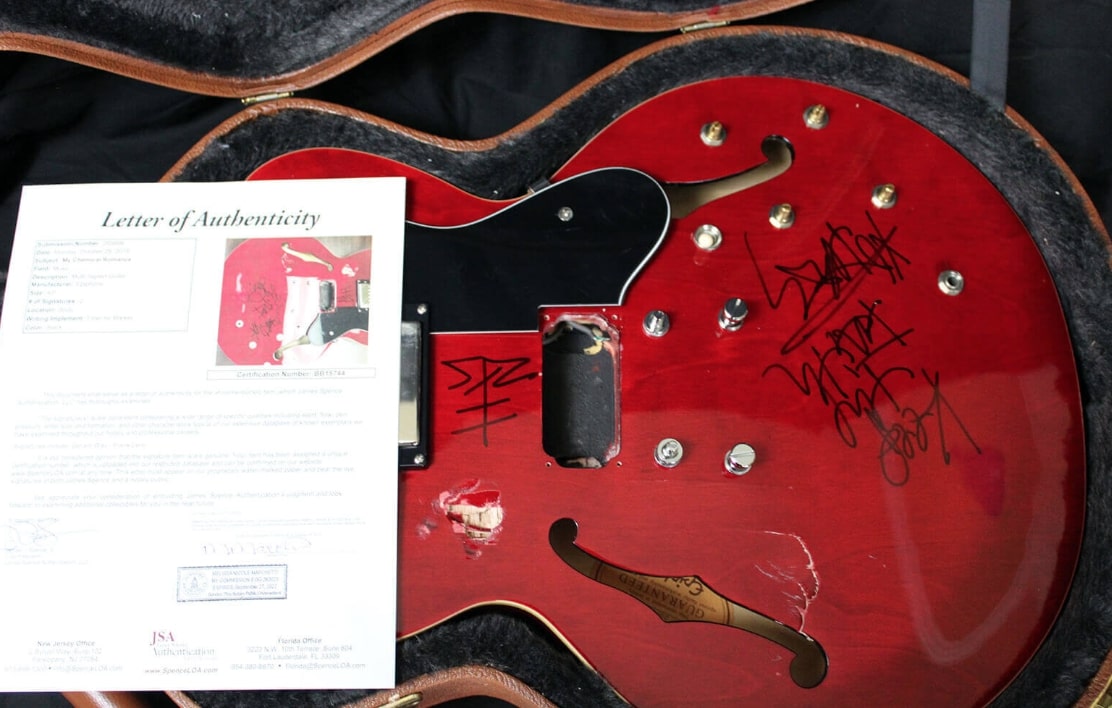 Who wants to help out an important cause and bid on a carefully maintained, well cared for guitar? If so, then head on over to @innocentlivesfoundation and click the link in the bio!!!! Thank you!

Iero clearly shows his sense of humor by discussing how carefully maintained the guitar is, seeing as he broke it on tour “probably around early to mid-2000s,” but it looks to be in pretty good shape besides that.

Who wants to help out an important cause and bid on a carefully maintained, well cared for guitar? If so, then head on over to @innocentlivesfoundation and click the link in the bio!!!! Thank you

The current bid for Iero’s guitar is $1500.00. The auction ends Dec. 7, so there’s about a week and a half left. This could be the perfect holiday gift to celebrate the return of My Chemical Romance.

For the direct page for this specific auction, head here. The Innocent Lives Foundation is also hosting plenty of other auctions with music-related pieces. For all information about the ILF, head here.  Currently, some other auctions include pieces from Slipknot, the Foo Fighters and Thursday. Check out an ILF Instagram post below with a list of some other items.

A post shared by Innocent Lives Foundation (@innocentlivesfoundation) on Nov 25, 2019 at 8:31am PST

Well, would you put up $1500.00 for this insane piece of memorabilia? Let us know in the comments below!