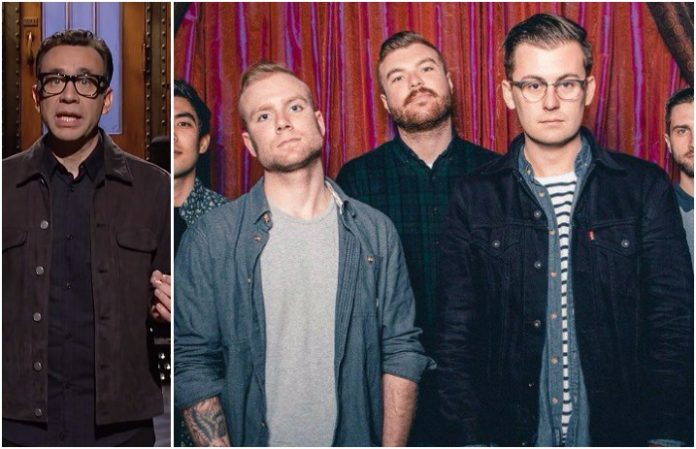 Seaway took to Twitter earlier this week to explain that their trailer—and nearly all of their gear—had been stolen while they were recording in LA.

And in an unexpected act of kindness, SNL and Portlandia actor Fred Armisen showed some serious generosity, giving Seaway drummer Ken Taylor one of his kits. Check out the amazing story below! (via Indie88)

Read more: Seaway’s trailer and most of their gear has been stolen—here’s how you can help

While recording their new record in LA, their trailer was stolen out of the driveway of the Airbnb they had been staying at, Indie88 reports.

“We lost a ton of gear in the theft, including my entire drum kit. We were all incredibly bummed out and spent the evening filling out police reports, making calls, and trying our best not to have a complete mental breakdown,” Taylor tells the site.

After he attended a comedy show, hosted by Armisen and Joe Wong, host of the drummer podcast The Trap Set, Taylor talked more with Armisen and explained the band's situation, Indie88 says. The site explains that Wong reconnected with Taylor to tell him that Armisen, who felt badly for the band, wanted to do what he can—by donating one of his drum kits to Taylor.

“After a few emails and a quick call from Joe, he told me that Fred wanted to give me one of his drum kits, that he felt terrible about what had happened, and that he wanted to help out because he knows what it is like to be in a touring band. The next thing I know I’m in the van on the way to Fred’s office, which ended up being the Portlandia office—in the middle of a writing session,” Taylor tells Indie88.

“Fred showed us around, introduced us to the writing staff and Carrie Brownstein, and then gifted me one of the drum kits he had used on stage the night before, a beautiful sparkle blue Shine Custom kit, along with some hardware, cases and a cymbal.”

Check out Taylor's amazing tweet about the encounter below.

In a strange turn of events, Fred Armisen just gave me one of his lovely drum kits. What a strange week. Nothing but respect for this man. pic.twitter.com/APi8BfyekA

In an effort to raise the funds needed to repurchase their gear, the band have offered up a new tee on their official website that you can pick up to help get them back on their feet. They also noted that their Paypal is open for donations as well.

Our trailer with almost all of our gear was stolen yesterday. Pick up this shirt if you'd like to help! Thanks ❤️ https://t.co/Zobbf3Mgl5 pic.twitter.com/A3Xl6q25Yv

In addition, if you live in the Los Angeles area, the band shared a list of things to be on the lookout for:

If you live in the Los Angeles area be on the look out for any of this stuff: the items in bold are the stuff that may be a dead giveaway pic.twitter.com/ORK6gSjJy8

What are your thoughts on Armisen’s act of kindness? Let us know in the comments below!