MxPx are back with their latest livestream event “Between This World And The Next.” The free performance is available to watch April 16 at 6:30 p.m. PST via the Alternative Press Facebook page.

The group are also back with their latest single, “Can’t Keep Waiting,” which premiered April 16. The song speaks to the emotions that accompany personal growth, setting passionate lyrics over the band’s characteristic uptempo punk sound.

Read more: 10 modern punk bands who are channeling acts from the first wave

Last week, MxPx lead vocalist and bass player Mike Herrera released a video to tease the stream. Herrera, who also performs with Goldfinger and Tumbledown, delivered a personal message to fans. He said that the release was meant to celebrate MxPx’s new song as well as the group’s successful launch of a career retrospective LP box set.

Herrera also added that the performance would continue the levels of interactivity seen from previous “Between This World And Next” performances.

“This show is going to be interactive just like all the other ones we’ve done,” Herrera says. “It’s not going to change because it’s free, so make sure you bring all your song requests.”

MxPx are also launching the new track “Can’t Keep Waiting.” The band’s latest release originally premiered live as part of the “Between This World And The Next” series, allowing fans to watch the song grow into its final form.

That evolutionary approach is fitting, given the song’s message about growth and transformation. In an exclusive explanation for Alternative Press, Herrera discussed the emotional themes at play in the band’s new track.

“I wrote one of my favorite lines in history, and it’s in this song,” Herrera exclusively tells Alternative Press. “‘Did your heart bite out of your chest?’ It’s about your heart coming alive inside of you, still beating in your chest but feeling foreign. Feeling trapped, the alien heart decides to bite its bloody way through your chest to get out. If you’ve seen the movie Alien, then I’m sure this makes more than perfect sense.”

Herrera went on to clarify that the song isn’t just meant to convey unfocused passion but also holds a deeper significance.

“It all passes by so quickly, and the deeper meaning takes over your mind quickly,” Herrera continues. “It all happens in one line of the song, and there are many other lines that have their own story to unfold. There’s simplicity on the surface and depth beneath. I really love this song and am so excited to finally unleash it into the world. To biting through chests! Figuratively speaking, of course.”

At the event, fans of the pop-punk legends will have a chance to request “Can’t Keep Waiting” along with other fan favorites and deep cuts.

“Between This World And The Next” is MxPx’s response to the interruption caused by the pandemic. The series launched in October, marking the group’s first full-band concert since the shutdown began. MxPx took a unique approach, electing for an intimate format driven by fan interactivity.

In the lead-up to the Oct. 16 event, Herrera stressed that the concert would offer new opportunities because of the format.

“Join us as we play live to the entire world over the internet!” Herrera exclusively told Alternative Press. “No stage, no waiting in lines, no traffic—just real people playing real music. This is a new, fun and different way to see us play music alongside regular in-person concerts. We’re gonna build and grow with this and hope you will be there with us.”

All indications are the band plan to further develop the model established for “Between This World And The Next.” In a video post for the April 16 event, Herrera reemphasized the band’s desire to have fan input.

The latest “Between This World And The Next” stream will take place April 16 at 6:30 p.m. PST and can be viewed here. “Can’t Keep Waiting” can be streamed here via Spotify. 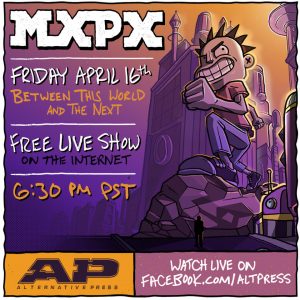 “Between This World And The Next” follows other livestream events from pop-punk legends MxPx. Similarly, “Can’t Keep Waiting” is not the band’s first release during the COVID-19 shutdown.

Like many artists, MxPx began 2020 expecting a fairly typical year. The group had booked an Australian tour and a festival in their hometown of Bremerton, Washington. However, the pandemic brought that plan crashing down.

MxPx decided to take initiative. Early on, the group were quick to release additional material. In April, the band put out a deluxe edition of their 2018 self-titled record, adding a number of bonus tracks and acoustic versions. Herrera also dropped an acoustic solo record, Moments Like These: Texas, featuring a number of live tracks recorded during 2019.

Read more: Richard Hell hated his album ‘Destiny Street,’ so he did it three more times

Not content to stop there, the band began working on a number of socially-distanced home recordings. The first release to come out of this period was “Worries,” a track that perfectly captured the anxiety many people felt in light of COVID-19. The group released a video, featuring MxPx members Yuri Ruley and Tom Wisniewski discussing their expectations for the post-pandemic world.

The video for “Worries” is available to stream below.

The group followed that recording with “Fever Dream,” which was designed to speak to the collective uncertainty of the moment. The song also came with an animated video, complete with the band’s beloved Pokinatcha Punk mascot.

The music video for “Fever Dream” is available to stream below.