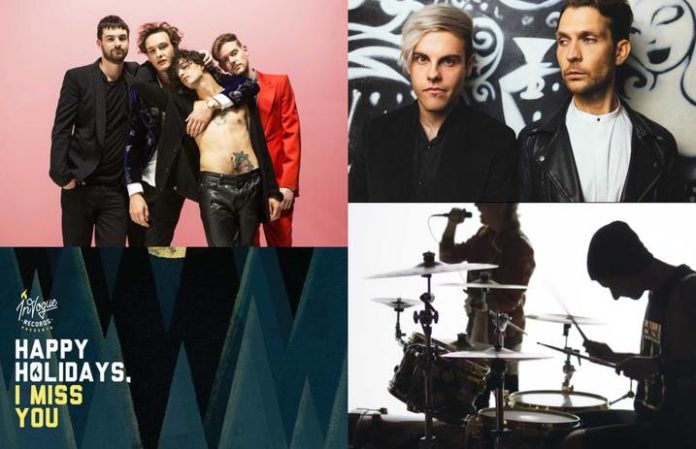 Read more: Abandoned By Bears release awesome new video and other news you might have missed Wednesday

Luke Holland and Aaron Richards took on the Chainsmokers and Halsey's smash hit “Closer.” What do you think?

The track follows the band's initial unveiling in November 11 and a subsequent campaign featuring the band's butterfly logo and the song's being featured in “elevator music” style through several videos.

So, what's your first impression?

Named NME's album of the year recipients, the 1975 have revealed their timeline for new music.

“We’ll put something out next year, whether it be a single or an EP, album in 2018,” frontman Matty Healy says to NME. He goes on to say the 1975 will “headline Reading and Leeds that year, headline Glastonbury the year after or the year after that.”

Here's Healy chatting to NME about I Like It When You Sleep, For You Are So Beautiful Yet So Unaware Of It:

5. InVogue Records released a Christmas compilation, featuring Chase Huglin, Courage My Love, In Her Own Words and more. It's available via Bandcamp for free download / pay what you want until New Year's Day. Any money raised will go here, in honor of the vocalist of In Her Own Words brother. The Jason Christopher Wilhelm Scholarship Fund acts to”provide scholarships, give assistance to cancer patients, and promote cancer awareness and research.” Check out the tracklisting below and a free YouTube stream below:

In Her Own Words – Yule Shoot your eye out
Chase Huglin – Christmas Eve / Pierceton Queen
Hotel Books – Christmas Eve Until I Leave
JT Woodruff – Down Patton Hill (Christmas '85)
Woven In Hiatus – Joy
Mark Rose – It Won't Be Long Now
Convictions – Memories In The Attic
Mirror Eyes – Of All The Charlie Browns In The World, I'm The Charlie Browniest
Punchline – I Always See You In December
September Stories – Christmas '12
Courage My Love – Last Christmas

There will also be 100 limited edition CD's for sale.

Mastadon's Brent Hinds broke his leg in a freak accident—as the frontman shared on his Instagram.

Broke my fucking leg starting my motorcycle goddamnit ��sorry to all the shows I was about to play with gto and west and more and fiend without a face.lifes a bitch then you die :(happy thanking !

NME reported Hinds was supposed to start tour with supergroup Giraffe Tongue Orchestra, and it hasn't been announced yet if this injury will prevent him from joining them.