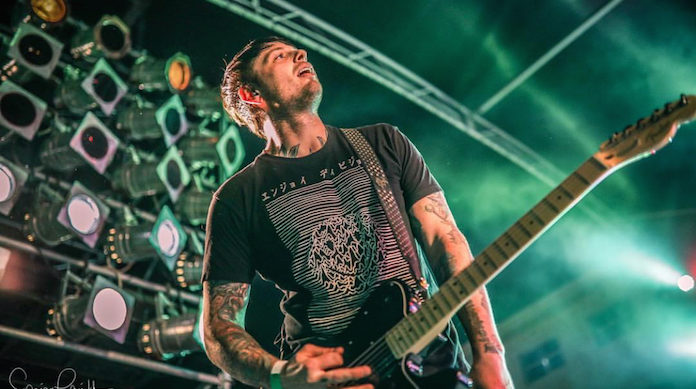 Matt Good knows the score. He remembers what he went through leading esteemed metalcore/screamo outfit From First To Last since the earlier part of this decade. He vividly recalls how the great alliance he had with Destroy Rebuild Until God Shows never really achieved its full potential. And he was terrified when both bands went into the ether and he didn’t have a Plan B.

Read more: 12 musicians talk about a time when THEY felt starstruck

“Without that naive ambition, who would really want to do this?” Good asks rhetorically, essentially confirming that hopes, dreams and a shit-ton of naivete is the psychic lubricant that keeps the music industry machine rolling. He begins to laugh. “I think the answer is probably ‘nobody!’”

On the latest Cautionary Tales podcast, Good explains to Jason Pettigrew his circuitous path from being a bandleader and respected sideman to selling his guitars and writing songs on laptops before entering the world of production. Good has steered records by respected artists as Asking Alexandria, the Word Alive, Memphis May Fire and Veil Of Maya, while still having time to supervise tracking for younger, lesser-known bands in desperate need of a reality check.

“I think [those feelings] are an integral part of the process, and then you learn as you go that things are not as you thought they were,” he continues. “And honestly, I have to admit that even now, [those goals] are so far away from what people with that mindset think that they are, because of digital downloading and how the internet has taken such a huge role in artists’ lives, fan connectivity and everything.

“People come in [to the studio] every day and be like, ‘Man, all we want to do is get on tour so we can live off music.’ And I’m like, [smirks], ‘OK, that’s a ladder, and that ladder has probably 250 steps on it. [Laughs.] Let’s start on step one and make some good songs.’”

On the podcast, he retraces the politics, lawsuits and expectations of From First To Last; ponders the short lifespan of D.R.U.G.S.; finds a new lease on music life via laptops with his bud AJ Calderone in Kit Fysto; and shares his experiences in the producing realm, describing himself as “a fun jerk” in the studio.

The 34-year-old Good is a family man with a wife and a young daughter, who probably won’t be slogging it out on tour in a van anytime soon. Don’t think for a minute that makes him soft, though. From First To Last are still an ongoing thing, much like buddies coming over for poker night than having to sate both record labels and fans with hits. And Kill It With Fire—his project with Asking Alexandria’s Ben Bruce—will come out when he thinks it’s ready.

“I think [having a] Plan B devalues what you’re doing a little bit,” Good reflects. “There are certain things in life where you go through with every single part of your being or you don’t go at all. And either fortunately—or unfortunately—the music business is one of those things.

“There is something to be said about making music uninhibited from expectation or need,” he says. “It’s really hard to put into words, but it just feels better to me.”

Reality checks, lawsuits, Travis Barker and dumpster diving behind Panera for food on tour. Welcome back to Cautionary Tales…