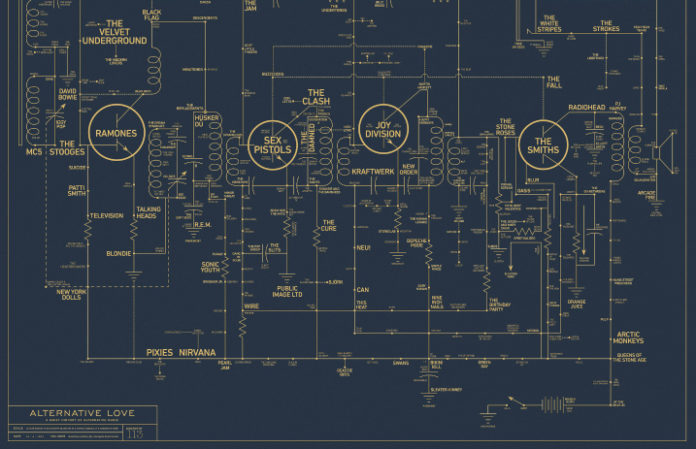 Every music genre can attempt to be traced back to its starting point, and designers at Dorothy released an intricate map that looks at the history of alternative music and its many, many branches. Check out the full chart below. (via Wired)

According to the map, properly titled “Alternative Love Blueprint—A History of Alternative Music,” the chart “celebrates over 300 musicians, artists, managers and producers” who the group at Dorothy believe played a pivotal role in shaping the alternative scene, starting with the Ramones, Sex Pistols, Joy Division and the Smiths, then branching out to groups ranging from Misfits to Nine Inch Nails to Green Day, and even Arctic Monkeys.

According to Wired, the poster is set-up “like a Spotify Weekly playlist manifested into poster form and frozen in time,” and the designer of the incredible map, James Quail, tells Wired that this poster is meant to look at history and guide a listener to new music.

The poster is available for purchase here.

What are your thoughts on this look at the history of alternative music? Let us know in the comments!